“If you are not in the dollar trade, you are missing out big time” so said a currency trader. The current sentiment favours buying the US dollar index and shorting currencies that are against the dollar such as the weakness we are witnessing in JPY and AUD. Commodities also suffer and faced headwinds as the latest talks by Fed officials on tapering the QE help to favour a stronger dollar. In addition, the better than expected economic data such as a lower jobless claim and better than expected retail sales number have improve economic sentiment. The US dollar continue to strengthen against many other major currencies that either have just started to cut interest rate or embark on quantitative easing. There were concern among economic leaders during the G7 summit about currency wars but there were no strong opposition. Therefore, low interest rate and quantitative easing will continue as the main tools to help the ailing global economy.

Global easing continues and the US stock markets propelled higher, carving out new all-time high ever since the beginning of 2013. The old adage of “sell in May and go away” continues to be questioned given the large amount of central bank hot money pumping into the system. Fed Chairman Mr Bernanke sees no asset bubble and deems the current strength in equities as the return of market confidence. Critics argued that companies are reporting lower revenue growth and the current rally is inflated from the liquidity provided by central banks. Some are worried that the market is promoting investors to take more risk and there was real concern that we are running back to the old financial style that crashed the global economy back in 2008.
Meanwhile, the Eurozone’s economy contracted for the sixth straight quarter and marked its longest recession on records dating back to 1995 - Reuters. The lack of economic growth is, huge debt and high unemployment continue to drag the Eurozone into deeper problems. As recession starts to bite in, austerity programmes may be put on hold and certain flexibility in spending will be permitted. Running a higher budget deficit was the initial target but given the current state, running the deficit is a better option for now. After the 2008 financial crisis, politicians and central banks around the world have managed to reduce the risk by kicking the can down the road. The only concern now is what if they face another crisis that is in the making? Can they avert that as well?

Gold hovered at $ 1426 during the early Asian trading hours and as London opens, prices start to head lower. Stops were taken out and the support at $ 1418 gave way easily as gold eked out another negative day. Concern among gold investor’s remains on the continuous outflow of funds from gold back ETFs and a slowdown in physical demand could soon dampen the current rebound. India government placed additional curb to reduce demand for the yellow metal. Investors’ confidence in holding gold remains fragile as equities are providing a better alternative. Just like any other currencies, the stronger US dollar has added selling pressure on gold price.

Technically, gold is weak and more downside pressure could build from here. A break below the 61.8% retracement line will give the bears more ammo to drive prices down to retest previous low. The MACD is about to cross lower again and the RSI and the stochastic fast line seems to support the idea that there are more rooms to the downside for now. We look for a short recovery rally that will be a target for additional short selling. 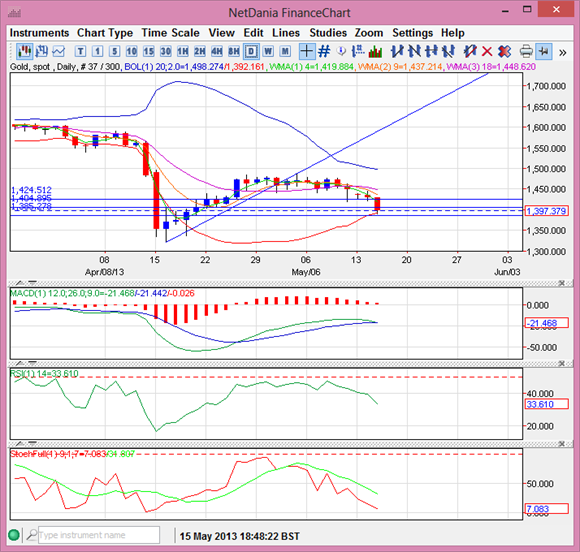 Silver prices tumbled after support at $ 23.19 gave way as it trades outside the descending triangle. The 4 hourly chart remain bearish and the MACD has crossed lower while the stochastic fast line remains weak. Previous support at 23.19 will now be resistance. The outlook on silver remains bleak and more downside pressure is expected in the next few weeks. We are not surprise to see a retest of $ 22.05 again. 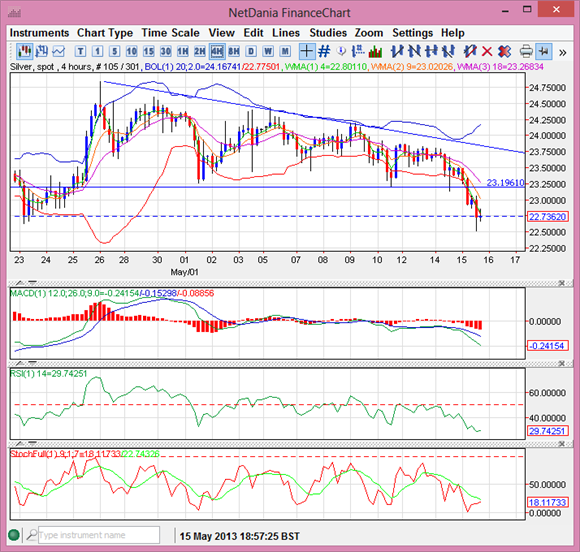