If you have been our loyal readers, we would like to take some time and thank you for your kind support and attention on our daily report. In our previous reports, we mentioned that a bottom in gold prices is near and also raised the likelihood of a corrective move higher. Given the latest price action, we felt that the June low at $ 1180.00 will be the bottom for now and gold prices are trading higher in corrective mode.

Gold previous advanced to July high of $ 1347 will now be the key resistance. It has since pulled back to a low of $ 1273 and found support. We covered this pullback in anticipation that the short covering and corrective move is over, with the possibility of gold retesting $ 1264 and $ 1245, at the same time contemplating the possibility of another retest of $ 1180 level. Last week price action confirms that the pullback may be over as prices only managed to break pass the 38.2% retracement from June low to July high. In addition, the constant talk among Fed officials on tapering has been priced in and a better US economic data did not cause any major sell-off. These developments suggest that the bulls are more confident to buy in the already oversold market. There is enough room for a move higher and right now we felt that a break of $ 1347 will take gold to test resistance at $ 1365 and possibly $ 1400 area.

We expect more short covering should prices rise higher and a break pass $ 1347 will be the key to higher prices. The current setup remains in favour for a move higher due to seasonal cycle, an inflow into the exchange traded funds which suggest buying interest, a weaker US dollar index (Ole Hansen of Saxo Bank - “The net-long dollar position against the eight IMM currencies fell by 13% to USD 20.4 bullion down from a July 16 peak at USD 29.4 billion”) and the unrelenting demand from China and India.
Despite the fact that inflows in gold backed ETFs has picked up, the trend may not persist as fundamental for gold are still negative - quote from a Hong Kong trader (Reuters). Our only concern is that the move higher carries risks such as a drop in physical demand, corrective move higher could be the new platform for short sellers to re-enter and the negative sentiment continues to clout the prospect of prices trading above $ 1600.00. Mr Schubert of NBD weekly Precious Metals report added the following concern “However, based on the above positive theories emerging for gold, one cannot yet convincingly state that that the prices would move towards US$1500, since there are enough theories if not more at the same time (tapering, India’s lacklustre demand etc) to push prices on the downside to test the lows of 2013.”

With the price of gold rising back above $ 1300.00, the gold bulls are relieved and see this as an opportunity to push higher. The recent price action could well indicate that short sellers are busy unwinding their position as they see the lack of follow through selling. The market is thin and most traders are waiting for a breakout so as to provide a direction to trade in. Technically, the candlestick on the daily chart remains promising with potentially more upside. The stochastic fast line also confirms a positive crossover of the slow line above the fast line and the RSI is heading higher.

Only if it breaks below 1273, then it will trigger more stop loss and could easily take gold to retest support at $ 1265 area and only a break below $ 1240 will warrant a revisit of $ 1210 area. On the other hand, if it can break above $ 1350 convincingly - we would not be surprise to see higher gold prices due to more short covering. 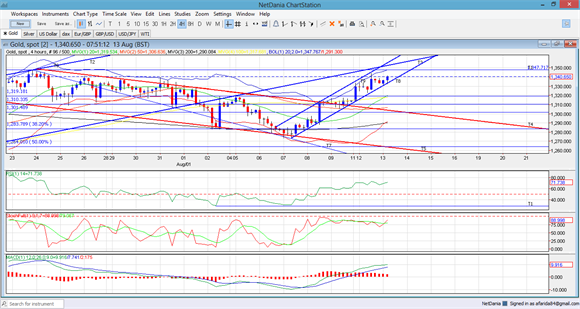 The weak US dollar index and previous retest of low at $ 19.20 (now become support) has given silver enough bullish momentum to trade higher. In our previous commentary, we also covered the following scenari
It has broken out of the downtrend channel line but still within a tight Bollinger band. A bullish breakout and follow through buying is needed so as to propel silver prices higher. Investors could pile more on silver on the back of a possible recovery and better than expected Chinese economic data (assuming that the data remain positive). Expect a retest of $ 20.60 and possibly as high as $ 21.05 before a period of consolidation.
Silver could embark on a mini uptrend line and the RSI seems to support the higher prices. The stochastic fast line has also risen higher while the slow line has got more rooms to the upside. 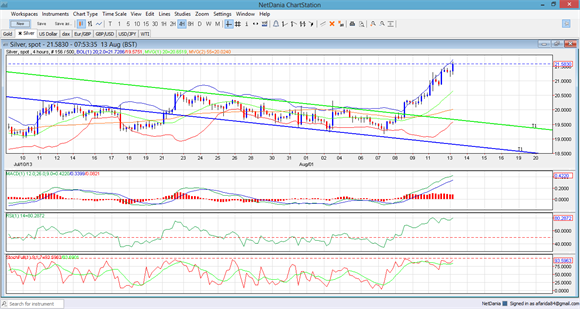