After a surprise dovish remark from Chairman Bernanke, bullion prices and in general risk assets rebounded higher last week. The US dollar bull went into hiding and the index plummeted against other major currencies. A temporary short squeeze occurred and this corrective rebound may have further upside. The risk to the current short term trend could come to an end as Chairman Bernanke is due to testify before congress this Wednesday and Thursday. US dollar traders will be waiting on the side-line before determining another sharp sell off or buy in the dip as the bull rally could continue. Mr Hilsenrath of WSJ (acclaimed “the Fed Whisperer”) argued that Mr Bernanke was actually hawkish during the Q & A session. He argued that the speech was in line with the initial purpose of the Fed remaining accommodative until we see a better economic data but tapering is now a matter of when not if. In addition, several FOMC members make it clear on their discontent on pro-longing the QE programme and their argument seems to grow louder and stronger with each meeting. Therefore, we argue that the dovish remark is also a temporary phenomenon that will wear off and further downside seems imminent.

Money managers have raised their concern as the Fed looks to taper its bond buying programme. At the moment, cash is king as they look to diversify in other investments. Others argued that the Fed has effectively forced funds to shift from the low yielding assets to the equity market. Gold and silver continue to face negative sentiment and it will be difficult to convince investors to start investing for now. Central banks continue their purchases as they are long term investors. Meanwhile, we have not seen a large pick up in physical demand that occurred back in April as investors are waiting for the price to stabilise. Lower price is expected and only once a bottom is in place (which we think are close) we would then see more buying interest. In the long term, we remain bullish on the prospect of the gold market but the short term technical and fundamental picture remains negative. We will remain vigilant and cautious at the start of this trading week. Watch the US dollar index.

In the past 2 weeks, we witnessed a volatile movement on major currencies as respective Central Banks governors and chairmen tried to outgun each other with at the 3 of them mentioning “forward guidance”. We see this simply as an act of rebalancing the sell-off that initially started with the sterling and Euro. Volatility at the start of the second quarter of 2013 has not fallen short despite the fact that summer is here (where volume is expected to be the lowest of the year). We maintained our view from our previous commentary that “The rebound in gold prices must be treated cautiously - rising prices could just be a smoke screen to what could be coming next”. Shorting the metal is far more favourable as it could retest $ 1180 and should it break lower, we see $ 1155 as the next target. 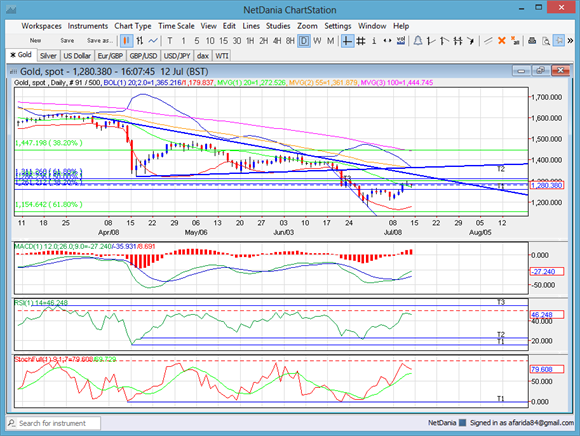