Jobless claim number came up higher than expectation for the second consecutive week - boosting both gold and silver prices. The general sentiment was a wait and see mode but as we mentioned many times in our previous commentaries, volatile trading remains in a tight range of $ 1660 to $ 1686 (gold) and $ 31.00 and $ 32.00 (silver).

Gold traded at the top range of $ 1683 before a quick sell off to find support at $ 1662.50 areas. While silver prices broke lower beyond the short term uptrend line to find support at $ 31.25 area. CNBC interviewed Fed Charlie Evans who suggested that the QE programme could end should unemployment reach the 7% target. In his interview, Evans added that he only see the 7% in 2014 and expect the Fed to continue the programme. Investors did not take kindly to his comment and start the selling spree on gold and silver.

PBOC said that China must be alert to changes in price-gain expectations and to imported inflation coming from various countries that are actively easing their currencies. They raised such concern as inflation risks could affect Chinese domestic economy that is growing rapidly. If policy makers were to increase rate and rein in their loose monetary policy then industrial metals could be badly affected.
Meanwhile, EU leaders started the two day summits in Brussels on EU budget talks.

Expenditure cuts are their top priority but analysts felt the talks will be “difficult and divisive”. As expected the ECB maintain the interest rate at .75% and Mr. Draghi was questioned at length regarding MPS, Euro strength as well as the possible bailout on Ireland. On the other hand, George Soros made a stark warning that he has drastically reduced all Euro-related exposure despite the fact that only a few weeks ago he was cautiously optimistic about the Euro zone.

Short Term:
The yellow metal is full of surprises and always put in a show. There was never a day without a volatile roller coaster adventure as prices ping down to retest support and dip buyers lining up their bids to push it back up. Nevertheless, it is still stuck in a range between $ 1665 and $ 1686. The stochastic has pointed lower and the MACD suggest a possible bearish momentum in the short term.

Medium Term: As per our last commentary, gold retested its support level at the 200 DMA ($ 1663.68). Stochastic has crossed higher but the MACD remains stuck in the negative zone. We will be more bullish should the resistance at $ 1685 and $ 1697 is taken out. 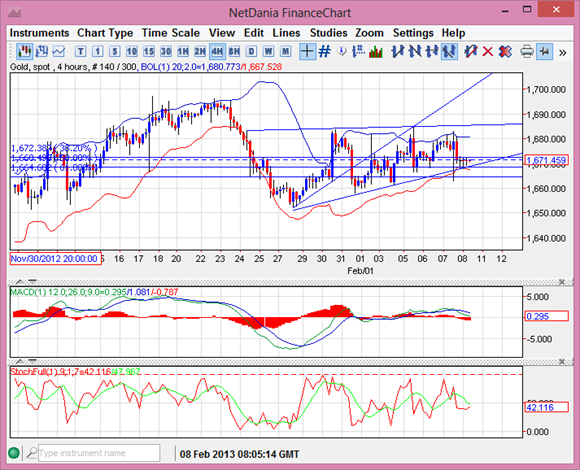 Short Term:
Bollinger bands are growing tighter which suggest a growing pressure of an outbreak. A downside outbreak failed and prices recovered after it found buying interest below $ 31.30 area. Short term stochastic has cross negatively and the MACD is heading lower. The 4 hourly charts put up a bullish symmetrical triangle pattern with an upside biased. A break pass $ 32.00 will give the bull a good reason to go long. 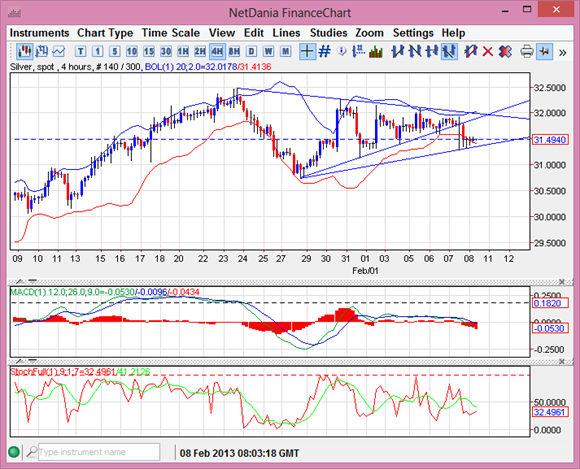 This article is written according to the author’s views and by no means indicates investment purpose. Opinions expressed at Sharps Pixley Ltd are those of the individual authors and do not necessarily represent the opinion of Sharps Pixley Ltd or its management, shareholders, affiliates and subsidiaries. Sharps Pixley Ltd has not verified the accuracy of any claim or statement made by any independent writer and is reserved as their own and Sharps Pixley Ltd is not accountable for their input. Any opinions, research, analysis, prices or other information contained on this website, by Sharps Pixley Ltd, its employees, partners or contributors, is provided as general market commentary and does not constitute investment advice. Sharps Pixley Ltd will not accept liability for any loss or damage, including without limitation to, any loss of profit, which may arise directly or indirectly from use of or reliance on such information. The data contained on this website is not necessarily real-time or accurate