LAWRIE WILLIAMS: 1,266 tonnes of Swiss gold move to Asia and Middle East in 2018

Despite the opening of a number of new gold refineries in the Middle East and Asia over the past few years, the small European country of Switzerland retains its traditional place as the principal conduit for the movement of gold from West to East.  Swiss refineries concentrate on taking in larger gold bars, doré bullion from the world’s mines and scrap gold and converting it to the small sizes and high purities most in demand in Asia and the Middle East.

The latest figures from the Swiss Customs administration highlight the position of the Swiss refineries in terms of global gold flows.  In 2018, no less than 1,473 tonnes of gold was refined, or re-refined, in Switzerland- an amount equivalent to a little under half the volume of the total annual new gold supply.  Of this amount around 86% was dispatched to Asia and the Middle East with the majority going to China, India and Hong Kong, but with significant amounts also to Thailand, Singapore, Malaysia, the United Arab Emirates and Turkey.  Greater China (the Mainland plus Hong Kong) remains the principal recipient by a large margin, followed by India.

This Middle Eastern and Asian demand, particularly the latter is generally assumed to see the gold flowing into stronger hands - in other words less likely to find its way back to the markets.  This is particularly so of China, with most of the gold to Hong Kong destined for onward shipment to the Mainland which prohibits gold exports.  The overall figures for Swiss Gold Exports in 2018 are shown in the graphic below from Nick Laird’s goldchartsrus.com website, followed by a second chart which details the country-by-country breakdown for December: 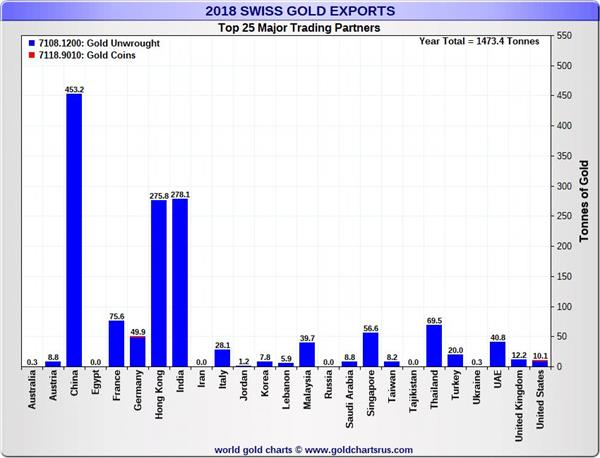 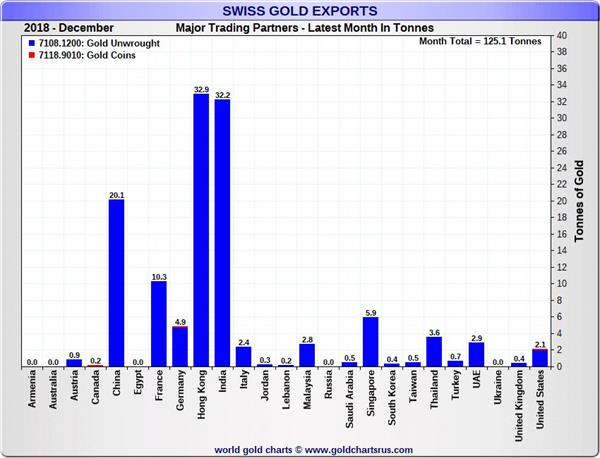 It should be noted when viewing the above charts that total Swiss Gold exports for 2018 were slightly higher than for 107, but below the levels for the seven years before then which probably does represent a transfer to new refinery demand in the Middle and Far East, but the higher 2018 figure over 2017 does perhaps represent a fightback for market share by the traditional refineries in Switzerland.

As for the December figures the surprise here is that Hong Kong regained its position as the principal destination for Swiss gold exports - but as we noted above most of the gold imported by Hong Kong is destined for the Chinese Mainland anyway. In this context imports by Greater China remain far in excess of those into India - the other major global gold consumer.