The latest data out of Switzerland on gold exports to China would seem to confirm the strong trend in late year Chinese gold demand.  Combined exports to mainland China and to Hong Kong (where nearly all will be destined for re-export to the Chinese mainland) totalled 75.8 tonnes, of which 28.8 tonnes, or 38%, went directly into mainland China, further confirming that although Hong Kong remains the primary route for Chinese gold imports, its exports to the mainland can no longer be considered a proxy for total Chinese imports with up to 40% nowadays going to the mainland direct.  This varies – more from some sources of supply and less from others.

See the latest chart from Nick Laird’s Sharelynx.com  below for the main recipients of Swiss gold exports in October.  India remains a significant importer too but is comfortably behind Hong kong and China, with lesser volumes going to the Middle East, other Asian nations of which Singapore is the most important and France, Italy and the UK being much smaller, but taking in 11.8 tonnes between them. 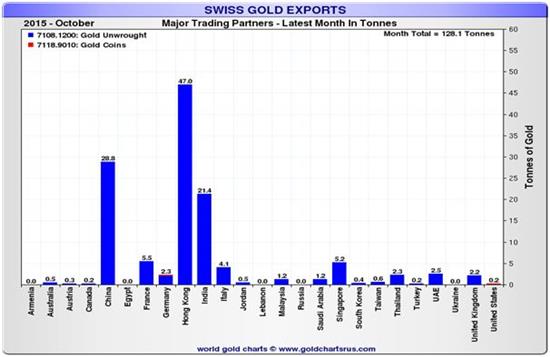 Known Chinese imports year to date from major exporting nations are thus now already running at 1,058 tonnes and extrapolating these figures for the full year – given some of the known data is over three months old – suggests annual KNOWN gold imports to mainland China are likely to be in the order of 1,370 tonnes this year.  (These figures broadly agree with calculations from www.bullionstar.com’s Koos Jansen – a recognised expert on Chinese gold data ).  Add to that gold imports from nations from which data is not available perhaps we are talking about imports of say 1,450-1,500 tonnes for the full year.  China’s own gold production is now estimated at around 470 tonnes for the year and add in scrap supply and we could be talking 2,100 tonnes or more of gold being absorbed.

This remains well short of SGE withdrawals of a likely 2,580 tonnes this year – see: Another 49 t withdrawn from China’s SGE in week 46 – huge 2,362 t YTD – a figure the PBoC equates to total annual Chinese gold demand, although the mainstream gold analysts may disagree in suggesting that consumption is far lower.  This is partly due to their calculation of what actually comprises consumption – but they also seem to struggle to reconcile the SGE figures with total internal Chinese gold flows with totally different reasons for the huge discrepancy coming from different analysts.  This suggests to the writer that they may just be coming up with theories to try and fit the facts and then stating them as being true.  Who knows?  The Chinese play their data cards close to their chests and they aren’t necessarily saying and are quite happy themselves to put out conflicting numbers.

The Chinese Central Bank is also reportedly buying gold at a rate of around 14-16 tonnes a month.  According to Jansen this gold does not come from SGE vaults so if all these figures are correct (and if anything we believe China more likely understates its gold data than overstate it), China is actually importing around 1700 tonnes of gold for domestic supply, financial transactions and into central bank reserves.  This compares with global new mined gold supply of around 2,700 tonnes if one excludes the Chinese gold output which is already in the country.  So China and India (which some reports say will import 1,000 tonnes this year (not including smuggled gold which could be substantial too) between them could well be tying up the world’s total new mined gold supply leaving nothing for anyone else.  Failing a big gold price increase, new mined gold output looks to be beginning to turn down too, thus exacerbating the position.

Thus it shouldn’t be too surprising that the tonnages of eligible gold stocks on COMEX and non-attributable physical gold in London’s gold vaults – as pointed out by a couple of speakers at the Mines & Money conference this week – is declining rapidly and at the current rate could be extremely low (close to zero) by the end of 2016.  If China’s rate of take-up continues to rise and India keeps importing gold at the current rate the crunch day for physical gold availability is approaching rapidly.  Failing a return to central bank sales (and at the moment the reverse is happening) where do we go from there?  The implications for the price are enormous.  2016 could thus well be the inflection year when physical gold availability from all sources and demand converge, and cross over, with enormous implications for the gold price.  Now maybe we are out with our timing, but the ‘trend should be your friend’ and the available supply trend looks to be declining while the demand trend is rising.