Is the worst over?  That’s the question that most gold and commodity analysts and investors will be asking themselves this Christmas.  We think there’s a good chance that it will be – with gold leading the way and commodities following thereafter.

Has the gold price bottomed yet?  Perhaps not, but we see the bottom as not far off and once that is reached – and more importantly perceived to be reached – it should be set to rise sharply.  In any case we do see the downside from now on to be decidedly limited.

The U.S. Fed is probably the key here.  The forecast model on which it bases its decisions appears to be hugely flawed – note the following comment from former CIA strategist Jim Rickards in an article published in the Darien Times: Jim Rickards: I am not a robot: Rickard notes “The problem is that the Fed is a model-based institution, and their models are obsolete. As a result, forecasts based on the models are persistently misguided, and policies based on the forecasts damage the real economy. Bad models produce bad results every time. This is also borne out graphically in a chart from a recent edition of Grant Williams’ excellent Things that make you go hmmm... newsletter which shows Fed GDP forecasts against reality – see below: 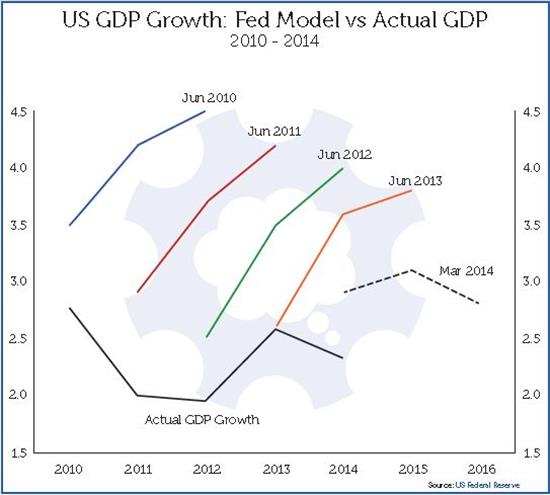 At the recent Mines & Money Conference in London, which brought together a remarkable array of excellent speakers, several expert, and highly regarded, presenters took the view that the Fed would be damned if it does raise rates this month but be damned if it doesn’t.  They saw the likely scenario of it having talked itself into a base rates rise this month of probably 25 basis points, but in the face of an economy which is not, in reality, growing nearly as fast as official figures might suggest, and a potentially very fragile stock market, the Fed could be forced to backtrack on its rate rise before mid 2016 and perhaps even institute a form of QE4 to try and yet again recalibrate the economy.  This would likely give a huge boost to the gold market.

But, coming back to commodities in general – in relation to industrial metals gold has actually performed pretty well despite all the media doom and gloom.  Iron ore and copper have performed particularly badly, mainly on the reduced expectations, and reality, of continuing growth from China.  We are getting to the time when we are going to see unprofitable mining operations being forced out of business and thus reducing supplies.  Capital and Expansion programmes have been put on hold, mineral exploration has been mostly reduced to exploring around existing operations in an attempt to prolong lives at least cost.  We are almost certainly at the beginning of a period where supply and demand will move back at least to near balance and declining prices have to be close to bottoming.

We note that probably the most astute mining related finance group, Orion, which has been one of the few sources of capital funding for high quality mining projects around over the past year, is to launch a new commodities and gold mining related hedge fund in January (See: New hedge fund to invest in gold and commodities as others exit and go short).  Orion is run by some of the most savvy and knowledgeable executives in the mining finance space and they obviously believe that the industry is at or near its bottom.  True other hedge funds are exiting commodities, but this is yet another sign of a bottom nearing or already here or hereabouts.

In the commodities sector, picking the bottom can be enormously rewarding and fortunes can be made as the upcycle, driven by shortage of supply (due to capital programmes and exploration being cut back, and with the long lead times to bring a new mine into production), and even relatively small (at first) demand growth, kicks in.  We certainly wouldn’t bet against Orion in having got its timing for the new fund launch spot on.