Switzerland has now announced its gold import and export figures for December and as usual they indicate continuing strong movement of the yellow metal from assumed weaker hands in the west to stronger ones in the east.  69% of the Swiss re-refined gold was destined for Asia and the Middle East during the month although demand from gold-interested nations in Europe was also perhaps a little stronger than usual.  Altogether Switzerland imported some 165 tonnes of gold during the month and exported only 98 tonnes leaving the country with surplus imports of around 67 tonnes that month.  Over the full 2021 year, the country’s refineries imported some 243 more tonnes of gold than they subsequently exported in higher purity than they received it. 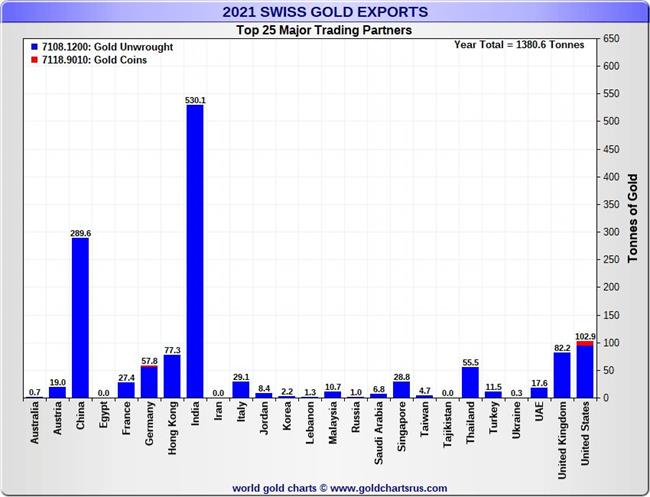 For the full year, the Swiss refineries imported a total of 1,544 tonnes of gold, mostly in slightly lower purity LBMA good delivery gold bars, plus gold scrap and doré bullion from mines around the world.  This is equivalent to over 40% of the world’s new mined gold output which makes the Swiss imports hugely significant for the global gold market and the distribution of the yellow metal to consuming nations.

Historically the Swiss gold refineries have processed an extremely important part of global gold supply and have distributed to buyers around the world, and in recent years this has largely meant purchasers in Asia and the Middle East.  Their speciality has been to take larger gold bars, gold scrap and impure gold bullion directly from mines and refine it into the ultra high purity smaller bars and wafers most in demand in world markets, particularly in the East.  At times the amount of gold processed through the Swiss refineries has been equivalent to over half of the world’s new mined global gold supply, so the Swiss figures have always been watched closely as representing an excellent indicator of global gold flows.

In 2021, the Swiss figures show that a little over 530 tonnes was destined for India (over 38%), the world’s No.2 gold consumer.  China and Hong Kong combined (the world’s No. 1 consumer) received around 370 tonnes in combination from Switzerland.  But this does not signify lower demand than in India there, as the country also imports gold directly from a number of gold-producing nations and is, itself, the world’s largest gold producer in its own right.  Overall China and Hong Kong together remain comfortably the world’s No. 1 consumer.  We have already pointed to a sharp increase this year in mainland China’s gold demand – See: China gold consumption up 45% yoy. Looking at the December figures alone (see above) one can see that India was again the dominant recipient, followed by China and Hong Kong combined.  Among other Asian nations, Thailand, which has a big jewellery fabrication sector, stood out, but perhaps even more interesting were the high volumes destined for France, Germany and Italy.  The first two of these nations have traditionally seen strong investor interest in gold, while the latter has, like Thailand, a particularly strong jewellery fabrication sector.

This all suggests that the current strength of global gold demand may be a little more deep-seated than had perhaps been recognised which bodes well for global gold demand going forward.  It will thus be particularly interesting to see how Swiss gold exports stack up in the months ahead.  Certainly the latest Gold Demand Trend figures out of the World Gold Council also suggest a good pick up in the key jewellery demand sector as the world begins to recover from some of the strictures associated with the Covid-19 virus pandemic, while investment demand looks to be remaining strong also.