Switzerland has announced its latest gold import and export figures (for October) and what we have previously considered rather anomalous statistics which have been apparent over the past several months seems to be continuing.  There thus seems to be the increasing likelihood that these represent the new norm – at least while demand remains muted in the previously key Asian and Middle Eastern markets.

We had noted in previous years the dominance of the Asian markets in particular as the destination for Swiss gold exports, oftentimes with 90% or more of Swiss re-refined and reworked gold flowing east.  Interestingly in recent months the flow of gold has largely reversed and in October, as can be seem in the bar chart below showing the destination of Swiss gold exports in October, most of the exports from this tiny, but dominant gold exporter have been destined for European markets, dominated by the UK and, latterly, France.  Indeed almost 80% of the October flows have been into Europe, dominated by the UK which, presumably for the continuing flow of gold into gold ETFs which have most of their gold vaulted in London.  By contrast only 19% went to the traditional Asian and Middle Eastern markets.

The biggest part of the lower level of Asian imports was weak demand from the Chinese mainland (10.2 tonnes), India (5.1 tonnes) and Hong Kong (only 0.3 tonnes) – all at one time big importers of Swiss gold.  This supports anecdotal evidence of far weaker gold demand in these traditional gold importing nations,  However, we might expect to see a slight pickup in the final two months of the year in the runup to the Chinese New Year (for China and Hong Kong) and for the traditional Indian wedding season months 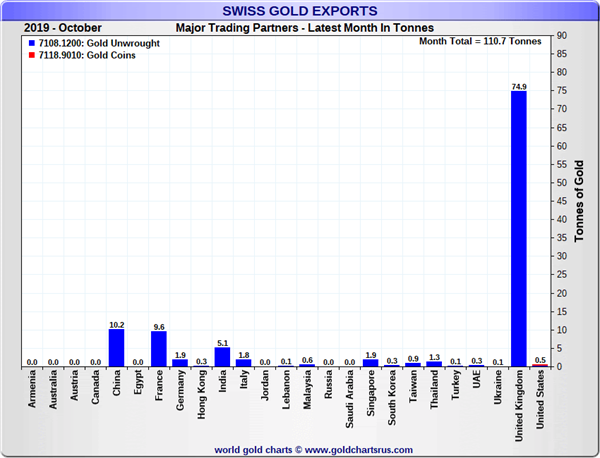 But the big anomaly did not just apply to Swiss gold exports.  The biggest contributor to the Swiss gold imports in October was the United Arab Emirates which supplied no less than 22.6% (28.4 tonnes) of the 125.4 tonnes of gold Switzerland imported in October.  Other key anomalous sources for Switzerland’s October gold imports included Hong Kong (4.8 tonnes) and Thailand (6.4 tonnes) – both normally net importers of Swiss gold.  Other significant sources were key European gold markets in Germany, France, Italy and the UK, which between them shipped 18.9 tonnes of gold to Switzerland in October.  The remainder of the gold going in to Switzerland that month was virtually all from traditional gold producing nations.

This reversal of the traditional flow pattern with normal importers becoming gold exporters suggests the running down of stocks due to weak demand, and also a degree of profit taking with the gold price higher in October than it was in the early months of 2019 when stocks may have been being built up.  It will take a substantial increase in demand from the world’s Nos. 1 and 2 gold consumers (China and India) for Swiss gold flows to return to anywhere near normal and this could yet be some way off.  But, if Asian and Middle Eastern demand does pick up, and gold ETF and central bank inflows continue at around current levels, we could see something of a gold price squeeze, so Chinese and Indian demand data is worth following closely to see if any pickup is forthcoming.