It’s always worth following the Swiss monthly gold export figures as they give a pretty good handle on the state of Asian gold demand in particular.  Switzerland, with its well established gold refineries is  the primary conduit for movement of gold from mines around the world, and from Western bank vaults into China, India, the rest of Asia and the Middle East as it specialises in taking partly refined dore bullion from mines, and larger gold bars from the bank vaults and re-refining them to the tenor and sizes most in demand in the east.  A volume total equivalent to over half the world’s newly mined gold passes through the Swiss refineries annually.  This small European nation is truly the best indicator out there as to the health of global gold dem,and

The latest Swiss gold export figures for April, as released by the Swiss customs authorities, are set out in the bar chart below taken from Nick Laird’s excellent www.goldchartsrus.com statistical service: 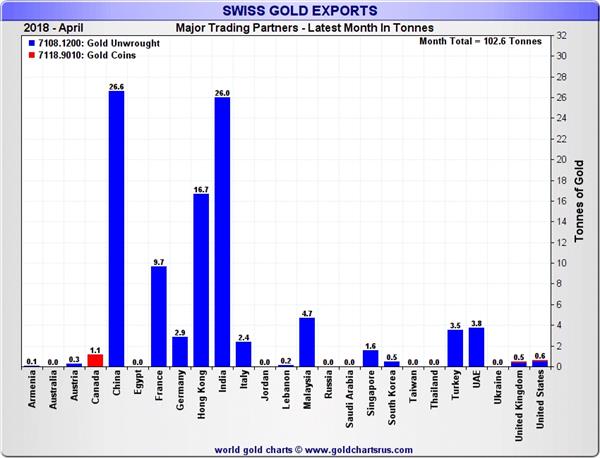 The specialist analytical consultancy, Metals Focus, notes that on a year on year basis, Swiss gold exports for the first four months of the current year have totalled 478 tonnes (2% up on the same period of 2017, but points out what it sees as something of an anomaly in that this year the rise is largely driven by demand in Greater China (comprising direct exports to mainland China plus Hong Kong) without which the country’s export total would actually have fallen by nearly one third.

Looking at the April figures, 43.3 tonnes (42.2%) followed this route, with another 25.3% going in to India – the world’s other mega gold consumer.  Altogether, Asia and the Middle East accounted for a little over 65% of the nation’s gold exports.

However China is probably the key market for gold at the moment – we have already noted an increase in SGE gold withdrawals which signifies a healthy market – See; Chinese gold demand way up in April, while the World Gold Council has reported stronger gold ETF inflows last month so the global picture may not be quite as weak as comment on the latest Swiss figures might suggest.

As to China itself, Metals Focus notes: “It is worth stressing that part of these gains came as a result of the tightening regulations on gold bullion imports imposed by the Chinese central bank in 2017, which led to a temporary slowdown in Chinese imports early in the year.”  The consultancy also notes that there has also been a 7% year on year pick-up in Chinese jewellery consumption in Q1 reflecting what it sees as a relatively benign economic backdrop with a correspondingly positive impact on consumer sentiment there.

Again, according to Metals Focus there were a number of factors contributing to the stronger start to 2017 – not least stock rebuilding ahead of the GST introduction at mid-year.  Jewellery demand is also seen as slow in the first four months of the current year, but there have been signs of a pick-up in April with jewellers reporting better year on year sales over the Akshaya Tritya holiday, considered an auspicious time to buy gold.  Indeed the local Indian gold price has returned to a premium over the London price – not a significant one but still a sign of improved sentiment.

Outside China and India, Swiss gold exports have been generally lower this year, reflecting poor global economic conditions which have impoacted on demand in Europe and the Middle East.  Metals Focus also notes that Swiss exports to the UK remained low at 7 tonnes, which it puts down to highlighting lacklustre interest in the yellow metal among institutional investors.

Switching to Swiss gold imports, Metals Focus comments that total January-April volumes were down by over 30% year –on-year to 443 tonnes. A fair portion of these losses was accounted for by the UK, normally the biggest constituent, which could reflect declining gold inventories.  Imports from East Asia and the Middle East also fell but by contrast, imports from most gold producing countries recorded small gains which the consultancy attributes to the fact that we may yet not have seen peak gold yet.  It is predicting a very small increase in global gold output again in 2018!