There has been much talk in the media of late of very slack gold demand from the world’s two leading importers of the metal. India and China.  But the latest export figures for the yellow metal out of Switzerland for October would seem to counter this as both have seen a strong recovery from the admittedly weak September figures.

In the latest figures released by the Swiss customs administration, India came out top of the list for October gold exports, taking 38 tonnes, closely followed by mainland China with 34.6 tonnes.  Hong Kong came in in third place with 19.5 tonnes, once again demonstrating that the former British Crown Colony is no longer the principal conduit for Chinese gold imports.  However if one adds the Hong Kong imports to those of mainland China the latest Swiss figures do show that gold exports to Greater China from the world’s largest re-refiner and exporter of gold were an impressive 54.1 tonnes.  These figures compare with the previous month’s of 17.2 tonnes to China, 11.6 tonnes to India and 11.1 tonnes to Hong Kong.  By the looks of things gold demand in China and India is alive and well as the mid-year anomalies fall out of the system.

Below is the country-by country bar chart for Swiss gold exports from Nick Laird’s  www.goldchartsrus.com website: 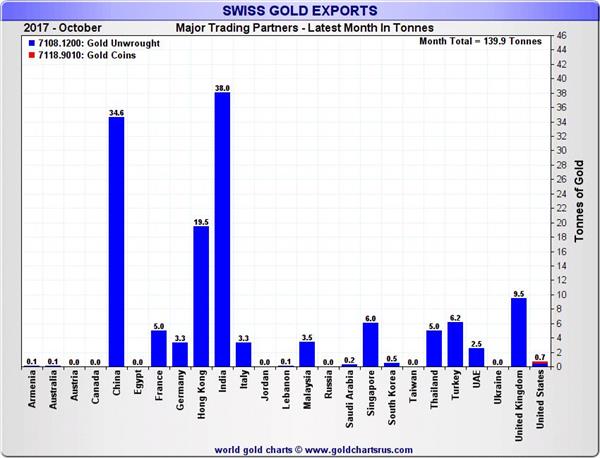 Analysis of the chart again shows the substantial flows of gold from Switzerland to the Middle and Far East – 83.3% of the Swiss exports are to this region.  What is of particular significance in this percentage is that in Asia and the Middle East the gold tends to land in firmer hands and doesn’t tend to find its way back on to the markets on gold price fluctuations as it may do in the West.  This is perhaps the principal reason that the long term future for the gold price is, in our view, extremely positive.  When the tide turns for gold investment in the West, as it almost certainly will, there will be a shortage of physical metal and this will drive the price up beyond the capability of paper gold trades to suppress it.  There does seem to be a certain momentum building in the gold price, but those who would suppress it have been dumping large amounts of notional gold on the futures market.  This cannot go on indefinitely and sooner or later the physical price will have to take off upwards, but as to when this tipping point will occur still remains hugely uncertain.