For many years many gold analysts have blithely stated that Hong Kong’s gold exports to the Chinese mainland are a proxy for total Chinese imports – or at the very least that the Special Administrative Region remains the principal route for gold flows into the Middle Kingdom.  Indeed hugely respected analytical consultancy, GFMS. In its latest update to its 2016 gold supply/demand analysis released last weekend persists in this assumption calling Hong Kong the principal gateway for gold flows into mainland China.

But, the latest Swiss official gold export figures for December show that this just isn’t necessarily the case any more.  Swiss gold exports direct to the Chinese mainland in December were almost FOUR TIMES those into Hong Kong and were MORE THAN THREE TIMES the amount of gold shipped from Hong Kong into the mainland.  We have long stated here that the proportion of direct Chinese gold imports via Hong Kong has been diminishing in importance, but the latest Swiss figures, although perhaps anomalous in their actual numbers, demonstrate that the Hong Kong net trade is no longer indicative of the total levels of Chinese gold imports – indeed far from it.  See table below for Switzerland’s country by country December gold export figures as released by the Swiss Customs Administration – chart supplied by Nick Laird’s excellent www.goldchartsrus.com website. 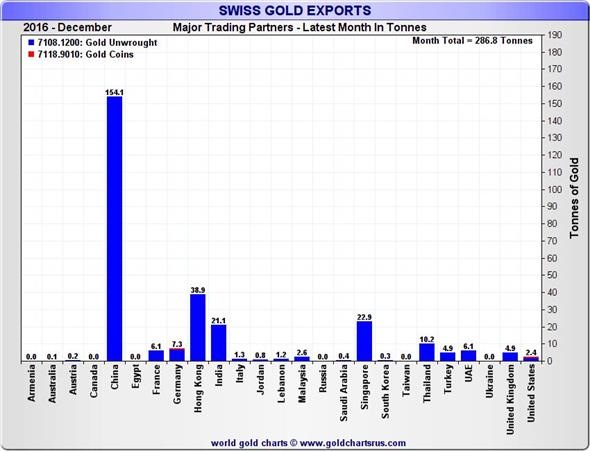 The table also shows that East and South Asian nations accounted for 87% of Swiss gold exports during that month with India, Singapore and Thailand all also being significant importers of Swiss gold.

We hear anecdotally that the four major Swiss gold refining companies, Heraeus, Metalor, PAMP and Valcambi have all been working round the clock to meet the Asian demand, although we assume there will be a substantial slowdown in late January now the Chinese New Year holiday is with us.  This is a traditional time of gift giving, of which gold plays an important part, and tends to account for usually high Chinese and Hong Kong import figures during December and January.  The Chinese Lunar New Year fell early this year – it’s normally in February – so we wouldn’t expect this year’s January import figure to be as high as that of a year ago.  This also tends to show up in  Shanghai Gold Exchange (SGE) withdrawal figures and in 2016 January was the peak month for these.  They were lacklustre during the year otherwise but did show a pick-up in the final months of the year as jewellers, gold dealers and fabricators restocked ahead of the New Year holiday – see table in my article: Latest SGE Withdrawals Lowest Since 2012, But What's The Significance For Gold Stock Investment?

So where is Switzerland getting the gold from?  For December the answer was London and, to a lesser extent the USA – see the goldchartsrus.com graphic on Swiss gold imports for the month: 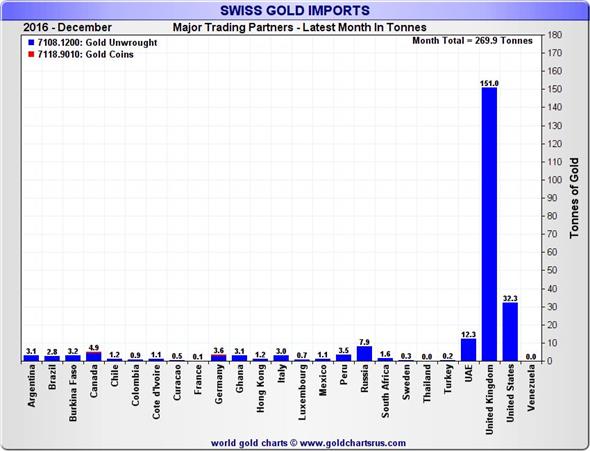 Indeed the import figures suggest that the gold flows effectively came from London, with LBMA good delivery bars being re-refined to the purity and sizes demanded by the Asian markets in Switzerland.  In some respects this is back to normality, although the London figure was higher than usual, after a year of anomalous Swiss imports.  Last year these had largely been flowing in from normal gold trading centres like Hong Kong and the Middle East suggesting weak 2016 Eastern gold demand enabling destocking by gold traders who were also taking advantage of the rise in gold prices during the year.

So do the latest Swiss import and export figures suggest a return to gold flow normality?  It is too early to tell.  We’ll need to watch future figures and, in the case of China the monthly SGE withdrawal numbers, before we can say this.  We suspect not totally with reports already coming in of a fall-off in Chinese flows as the New Year holiday began.  But despite this the gold price has been holding up remarkably well even with the Chinese being on holiday and this has very much been down to the uncertainties looming up from initial moves by the Trump Presidency.  Uncertainty tends to be good for the gold price!