The latest figures from the Shanghai Gold Exchange for the month of July see a marginal fall in demand for that month compared with a year earlier, but are still in total heading for a higher full year total than in 2017. The July gold withdrawal figures came in at 137.41 tonnes – around 5% lower than in July 2017 but almost 17% ahead of the 2016 figure for the same month. On a cumulative basis, SGE gold withdrawals for the first 7 months of the current year at just short of 1,176 tonnes are running just over 4% higher than at the same time a year ago when the full year total was 1,129 tonnes so it looks like China is on target for another plus 2,000 tonne year..

Under the Chinese system all imported and domestically mined gold has to pass through the SGE so SGE withdrawals represent a not universally-accepted measure of true Chinese gold demand. The major gold consultancies like Metals Focus (whose figures are used by the World Gold Council), GFMS and CPM Group do disagree with this measure and come up with much lower figures, but their demand parameters tend to be somewhat limited and usually come out even below known Chinese gold import figures from countries which break down their gold exports on a country by country basis. Thus they do not seem to take into account China’s own gold production estimated at some 429 tonnes last year by Metals Focus, nor imports from gold producing nations which do not break down their gold exports or do not publish them at all.

A comparison bar chart of SGE withdrawals for the first seven months of the year for the past 11 years published by Nick Laird’s www.goldchartrus.com service shown below gives an excellent representation as to how this year’s withdrawals are stacking up in comparison with prior years: 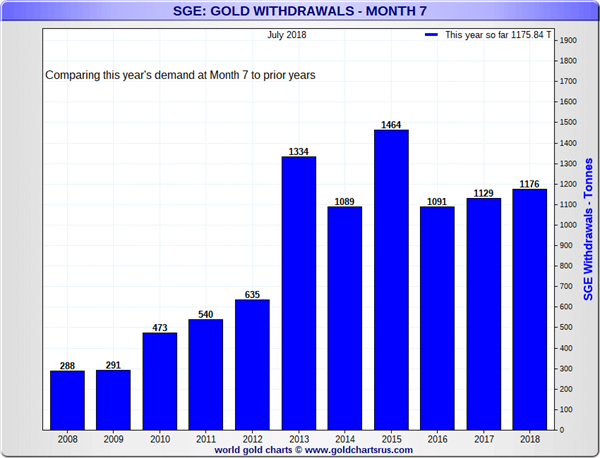 The above chart shows that SGE withdrawals have been climbing steadily for the past three years, although are still below the two record years of 2013 and 2015. 2013 was when the Chinese fell back in love with gold and purchased record amounts after gold prices fell sharply in 2012 and early 2013. In the latter year readers will recall the big gold ETFs were being decimated and excess gold supply to the markets was readily available and much of this was snapped up by the Chinese who have not really looked back in terms of gold purchases which have remained at a high level since.

It will be interesting to see how gold imports do this year as China’s domestic gold production appears to be continuing to fall, although the country remains by far the world’s largest gold producer from its own mines and from smelting and refining bought in concentrates from base metals operations. If total demand is to hold up, as it appears to be doing, then imports will rise – perhaps substantially. However the country’s economy could be affected by the Trump tariffs, which could possibly put a dent in the economy, and consequently in gold purchases, in the remainder of the year. We will thus continue to watch the SGE’s monthly gold withdrawal figures closely and report on them as a strong guide to Asian demand.

India, the world’s second largest gold consumer, also saw gold imports rise sharply in the 2017/18 financial year which ended in March. Indications are that gold demand is holding up there and it tends to pick up in the final few months of the year, so the combination of strong demand from the world’s two major gold consuming nations should, we think, put a floor under the gold price and help lead to an advance in the final two quarters of the year.