The Shanghai Gold Exchange (SGE) gold withdrawal tonnage for September showed an improvement on the August figure, but was still well below the corresponding month’s figure for the previous few years.  While we hear anecdotal reports of stronger gold demand in the world’s largest consuming nation, this is not yet really filtering through to the SGE monthly gold withdrawal announcements, so it still looks as though the full year withdrawals figure, which we equate to be representative of the Chinese mainland’s real annual gold consumption, is likely to be well down on that for the preceding years.  At the moment it looks like coming in between 300 and 400 tonnes lower than for 2017 and 2018 unless there is a major (and perhaps unlikely) pick up in the final quarter of the year.  See table below for details:

We do not see this apparent gold demand fall-off as being too surprising given the adverse effects of the U.S.-imposed trade tariffs on China’s economy and GDP growth. Meanwhile, as far as the global gold supply/demand equation goes, the Chinese demand shortfall is being offset by a big increase in gold being absorbed by the world’s gold ETFs and continuing strong take-up by central banks worldwide, while production growth is minimal – or possibly zero – as Peak Gold materialises, albeit marginally slower in coming about than many analysts have been predicting.

Re. The above, the World Gold Council (WGC) has published updates on gold ETF accumulations and central bank gold purchases so far this year.  On gold ETF increases, the WGC reports that in September global gold-backed ETFs and similar products recorded US$3.9 billion of net inflows across all regions, increasing their collective gold holdings by 75.2 tonnes to 2,808 tonnes, the highest levels of all time. Holdings surpassed late 2012 levels, at which time the gold price was near US$1,700/oz, 18% higher than current levels.  So far this year (to end-September) global gold ETFs have added 368 tonnes of gold – more than offsetting the decline in Chinese demand to date.

On central bank purchases, the WGC notes that on a net basis, reported year-to-date (to end-August) purchases – of a tonne or more by the world’s central banks come to well over 450 tonnes. Of this, a total of 14 central banks have increased their gold reserves so far in 2019, compared to only two that have decreased their gold reserves. Should central banks remain net purchasers this year – which WGC analyst Krishan Gopaul reckons to be a ‘racing certainty’ – it will also mark a decade since they switched from being net sellers.  Extrapolating the latest figures for the full year suggests that central banks will add a net 650 tonnes or more of gold to their reserves in 2019 – a similar level to central bank purchases in 2018, which the WGC estimated at 651.5 tonnes.  The graphic below, courtesy of the WGC, shows the top 10 central bank net gold purchasers to end August 2019 as reported to the IMF (figures in tonnes): 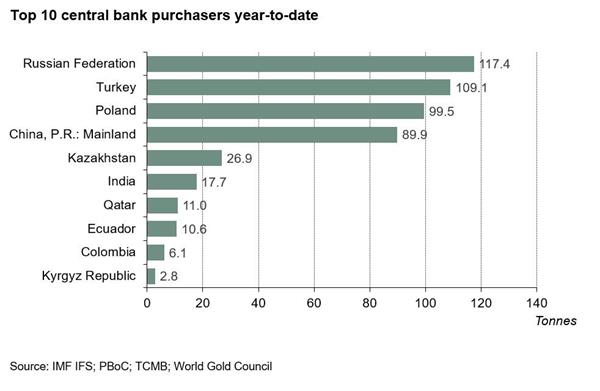 So in terms of gold supply/demand fundamentals, these remain positive for gold so far despite the Chinese downturn and reports of declining demand due to higher prices from the world’s No.2 gold consumer – India.

The gold price fell towards the end of last week and closed back below $1,500 on reports of good progress in U.S./China trade dispute talks and a resultant boost in U.S. equity prices reducing safe haven demand for the yellow metal.  But despite some apparent concessions by both sides, the two nations look to be as far apart as ever on many key points of dispute.  We don’t see any early end to the differences despite President Trump’s somewhat perhaps over-optimistic statement following the latest talks – a positive viewpoint that does not seem to have been echoed by the Chinese.

Thus, overall, we see the gold price regaining the $1,500 level yet again in the near future, but whether it will then advance strongly through the remainder of the year, as many commentators suggest, is rather less certain.  A geopolitical flare-up could re-ignite the price, however, and the U.S. Fed’s next interest rate decision (the current odds are on another small reduction) due at end-October, and the ensuing minutes, could also have an effect one way or the other,  But at the moment we wouldn’t bank on the year-end gold price being hugely above current levels – perhaps $1,520 or so unless something drastic happens in the meantime.