This is beginning to sound like a broken vinyl record, but the Chinese Central Bank has reported yet another zero increase in its gold reserve in August – for the 22nd month in a row! The country’s total gold reserve – as reported to the IMF – officially remains at 1,842.6 tonnes although most China followers reckon the nation’s real gold reserve is considerably in excess of this figure but held in a way that the country does not feel the need to report the true amount until it is deemed expedient to do so. When it feels the time is right, the additional gold is then moved into the official forex data.

Thus on an official basis, the value of the country’s gold holdings fell in August by US$1.096 billion given the lower gold price, and this amounted to only 2.3% of the country’s total forex holdings, which themselves fell by $8.23 billion in August to still a massive $3.11 trillion. A fall had been anticipated by the markets but perhaps by not quite as much.

Regarding the reporting of its gold reserves China has quite a track record of delaying increases for several years at a time as is shown in this graphic from Nick Laird’s goldchartsrus.com website.

Chinese Gold Reserves as reported to the IMF 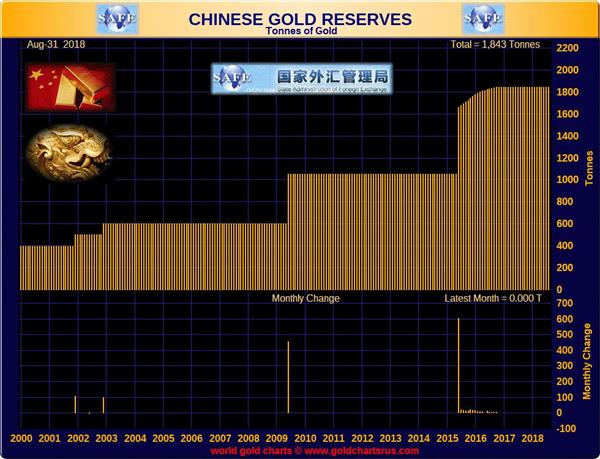 As can be seen, the country reported zero increase in its gold reserve from late 2002 to April 2009 and then again from April 2009 until July 2015 and on each occasion then reported massive increases, presumably built up over the previous 6 years, but held in some unspecified accounts which the Chinese government felt no need to report – at least that’s what they said at the time. Then from July 2015, somewhat cynically, the country did report monthly gold reserve increase for the 15 months prior to the yuan’s final acceptance into the IMF’s special drawing right (SDR) basket of currencies as the third largest constituent after the US dollar and the euro. The other two constituents are the Japanese yen and the UK pound sterling. And once this acceptance was confirmed, China abruptly ceased to report any monthly increases in its gold reserve. Make of that what you may! (The SDR was initially defined in 1969 as equivalent to 0.888671 grams of fine gold—which, at the time, was also equivalent to one U.S. dollar. After the collapse of the Bretton Woods system, the SDR was redefined as a basket of currencies which has changed over the years to the five constituent currencies noted above.)

Most analysts and commentators, including this one, firmly believe that China is continuing to build its gold reserves without reporting the increases. And furthermore what is reported may equally be a fiction and nowhere near the full size of the nation’s true gold reserve figure. It has a track record of only reporting increases in its reserve figure when it feels it opportune to do so.

But why? Some believe this is a ploy to enable it to continue to add gold into its reserves at low prices in recognition that if the true size of the Chinese gold reserve was revealed it would drive the gold price substantially higher. We think this will probably happen in due course, but at a time of China’s choosing which may be sooner rather than later should it be felt that the Chinese economy needs a boost given the country’s citizenry has been persuaded to invest in gold bullion, which is readily available through the country’s banks. A gold price boost would thus substantially increase consumer wealth which might be reflected in a rise in spending which could be valuable if President Trump’s tariffs put a dent in exports.

But from a geopolitical standpoint the Chinese are believers that the countries with the biggest gold holdings will ultimately call the global financial tune. To this end the country’s leadrers may well be trying to implement building its gold reserve to a level in excess of the U.S.’s reported 8,133.5 tonnes.

China also seems keen to reduce its reliance on the US dollar, along with a seemingly growing number of other countries and accepting, or making, payments in gold might be a way of implementing this but it needs a much bigger gold holding to enable it to do so. Certainly this is almost certainly already being put forward in payments for oil, thus circumventing the petro-dollar, from countries like Russia and Iran which have fallen foul of the Trump Administration – and perhaps Venezuela also – all major oil producing nations.

Thus we anticipate China will continue to report zero increases in its gold reserve for the foreseeable future and we will continue to doubt the Chinese implied assertion that reserves are not rising through its continuing reporting of a static reserve volume to the IMF. We will continue to monitor this situation so check back here in a month’s time when the country’s September forex figures are announced. We don’t expect to see any change then either but we could be surprised!