Gold flows from West to East seem to be holding up well, at least as far as imports into Greater China from Switzerland are concerned.  The small European nation, which has a number of specialist gold refineries, has exported so far this year some 400 tonnes of gold to China and to its special administrative region of Hong Kong in the ratio of around 69% direct to the Chinese mainland and 31% to Hong Kong – with most of the latter ultimately destined for mainland China too.

The actual Swiss gold export figures for the first six months of the year are Mainland China 274 tonnes, Hong Kong 126 tonnes.  Overall this Swiss export figure alone is equivalent to almost 30% of global new mined gold output over the period excluding that from China itself.  All the Chinese gold output remains within the country as gold exports are prohibited.   With China also importing gold directly from countries like the UK, USA, Australia and no doubt others this one country probably absorbs the best part of half the global new mined output of gold and with the country’s middle class continuing to grow, and the country’s own output beginning to fall, gold imports are likely to increase in the years ahead putting additional pressure on the global supply/demand balance.

As an indicator of potential Chinese domestic purchasing capacity, sales on ‘Singles Day’ – the 11th of November annual promotion launched by Chinese internet shopping phenomenon, Alibaba, dwarfs anything in the U.S.  In a 24 hour period, Singles Day accounted last year for around double the turnover achieved in the USA over the whole Thanksgiving holiday, which includes the Black Friday and Cyber Monday mega shopping days!  And the Singles Day sales volume seems to grow exponentially every year.  Some purchasing power.

The latest Swiss Gold Export figures for June on a country-by-country basis are set out in the below chart from Nick Laird’s www.goldchartsrus service. 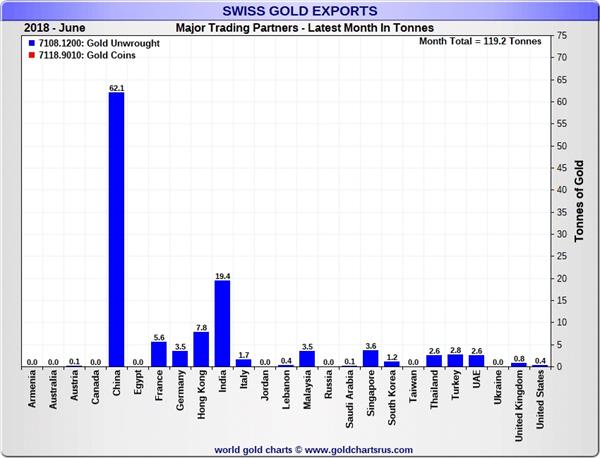 As can be seen from the country-by-country totals, Asia and the Middle East again accounted for over 89% of all the Swiss gold exports in June with mainland China and Hong Kong between them accounting for nearly 60% of the total.

Overall Swiss gold exports though are running lower this year than last at 718 tonnes as against 805 tonnes in the same period of 2017, while imports came in at 682 tonnes in H1this year, compared with 877 tonnes in H1 2017.  The decline in both imports and exports is probably due to the growth in gold refining capacity elsewhere, notably in the main destination areas with some of these new refineries being set up by the Swiss refiners themselves.

But the Swiss figures, even at the lower level this year, serve to emphasise the two points of a continuing flow of gold from the world’s gold mines and the West to what are seen as stronger hands in Asia, and also demonstrates the declining importance of Hong Kong as a conduit for Chinese gold imports.  As we pointed out earlier (See:  China H1 gold demand exceeds 1,000 tonnes) Chinese demand as represented by gold withdrawals from the Shanghai Gold Exchange (SGE) is back on the growth path again.  This is by far the most important demand source for gold globally and with China’s own gold output apparently slipping – although it still remains by far the world’s largest gold producer – the potential for ever-rising imports continues to grow with the purchasing class becoming bigger and wealthier and domestic supplies slipping.