Readers of my writings here will be well aware that I do not believe that China has not being increasing its gold reserves which, in terms of the figure reported to the IMF, have now remained unchanged for a full calendar year (See: The fiction in Chinese gold reserves and media import coverage).  It seems to be more than coincidental that the nation has reported a zero increase in its gold reserves ever since the yuan became an integral part of the IMF’s special drawing right in October last year and looks to have reverted to its historic pattern of not reporting gold reserve increases while building them up surreptitiously and then only announcing any rises at around five or six year intervals – or when it suits the country to do so.  We also feel that even these reported reserve levels probably understate the country’s true gold reserve position – probably quite substantially.

So, another month has come and gone and China’s official gold reserves remain officially at 1,842 tonnes – see Nick Laird’s www.goldchartsrus.com graphical representation below showing what to us are the extremely anomalous reported Chinese official gold reserve figures from 2000 as reported by that nation’s central bank. 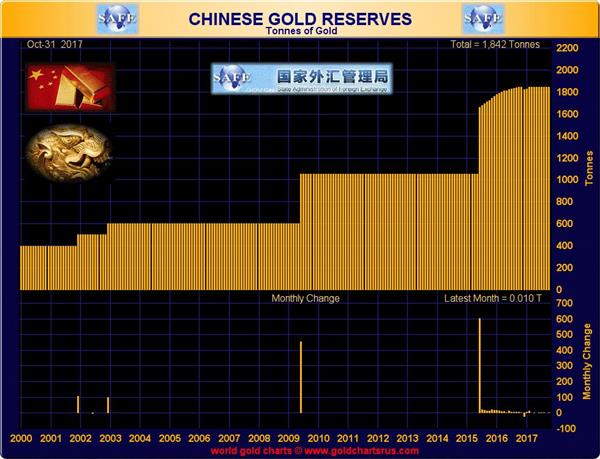 As can be seen the country did report month by month increases from July 2015 to October 2016 in the runup to the yuan’s acceptance into the SDR, but ever since then the gold reserve position appears to have been effectively frozen – the IMF certainly has reported no change over this period, but it relies on the figures released by the country for its data.  The figure keeps China officially in fifth place among national gold reserve holders, but Russia, in sixth, which does report its monthly gold increases is rapidly closing the gap – that is if one takes the official Chinese figures at face value.