The Asian Powerhouse’s September reporting month has been and gone and still China is officially reporting a zero increase in the level of its gold reserves that month.  That now makes it 11 months in a row that the country has not ‘officially’ added to its gold reserve figure which remains at 1,842.6 tonnes as reported to the International Monetary Fund (IMF).

Readers can be forgiven for feeling this is déjà vu as far as this reporter is concerned.  We have dutifully been reporting these official zero increase figures on a month-by-month basis and expressing our view that these figures are bogus and that China has, in reality, been adding to its gold reserves the whole time, but making the internal, somewhat spurious, claim that it does not need to report such additions to the IMF as this newly added gold is not being held in its official foreign exchange (FOREX) account, which it dutifully reports, but in some other government account.  This is a tried and trusted pattern the country had been following for many years only publishing its ‘true’ reserve increase figures when it suited it at five or six year intervals.

Nick Laird’s 17 year chart of ‘official’ Chinese gold reserve reporting from his excellent www.goldchartsrus.com website shows off this reporting pattern extremely well.  The only time in recent years that China has published any month-by month gold reserve accumulations was in the 16 months ahead of the yuan being accepted as an integral part of the IMF’s Special Drawing Right basket of currencies.  We don’t think it coincidence that such month-by-month reporting effectively ceased once the yuan became part of the SDR, thus paving its way for acceptance as a reserve currency – or at the least in global trade. (Note there do look to be minute discrepancies in China’s month by month reserve figure in the chart but we put these down to these gold reserve figures being calculated based on dollar FOREX values.  The actual reserve volumes as reported to the IMF are unchanged month by month). 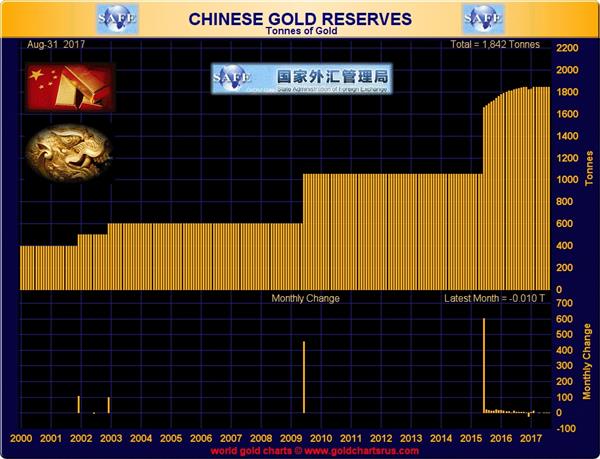 As to whether these have been ‘true’ total reserve figures either remains open to doubt. Some analysts guesstimate real Chinese gold holdings as being far higher than the officially stated levels by a factor of 3-4x.  The theory is that China is seeking to top the USA’s stated reserve of 8,133.5 tonnes, perhaps by the end of the decade.  Russia is also building its gold reserves, currently at a rate of around 200 tonnes a year and it is thought that both nations feel that gold has an increasing role to play in any global financial reset which lies ahead, as well as using gold purchases to move away from an overall reliance on the US dollar in their FOREX reserves.  China is already looking to move away from the petrodollar in its oil purchases by paying for these in yuan (renminbi), which would then be exchangeable for gold on a Chinese exchange.  Russia would be the most likely beneficiary of this policy, although there is anecdotal evidence that Middle Eastern oil producers, and perhaps Venezuela, might find such a policy attractive as the world moves away from decades of dollar dominance.