There is a certain amount of controversy over whether Shanghai Gold Exchange actual gold withdrawal levels are equivalent to the country’s true gold demand or not.  The major gold consultancies like Metals Focus, GFMS and CPM Group all aver that they are not, yet the monthly and annual gold withdrawal figures as published by the SGE bear a far closer relationship to known Chinese gold assimilations (gold imports + domestic production + scrap supply) than the consultancies’ demand estimates and therefore we stick by our opinion that SGE gold withdrawal figures are a far better representation of Chinese gold consumption (in terms of the amount of gold bullion being absorbed by the nation) than other estimates of Chinese demand despite a major discrepancy with the figures provided by the consultancies.  In any case SGE gold withdrawal comparisons on a month by month level have to be indicative of Chinese internal demand.

The table published below, thus presents the month by month SGE gold withdrawal figures for the past three years – years which include the record 2015 year where Chinese demand peaked.  As can be seen, on a year by year basis 2017 is coming out higher than last year although still comfortably below the 2015 record.

Many media reports have been suggesting weak Chinese demand this year - probably based on the sharpish drop in gold export figures to the Chinese mainland from Hong Kong, which used to be the main import route for foreign gold entering China.  But to counter this, the most up to date SGE withdrawals figures suggest that 2017 is heading to come in at over 2,000 tonnes.  If December withdrawal figures come in at close to last year’s 196 tonnes, then the full year total will be comfortably over 2,000 tonnes, but given the Chinese New Year in 2018 falls around 3 weeks later than in the current one, the December withdrawals level could well be higher than last year bringing the annual total within range of the 2013 and 2014 totals –previously the second and third highest on record – see graphic of the 11-month SGE withdrawals totals for the past 10 years from Nick Laird’s www.goldchartsrus.com site. 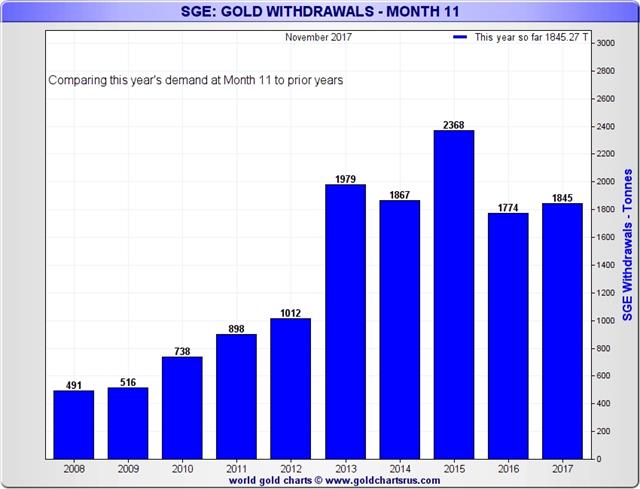 So, by all considerations, Chinese gold demand is still alive and well, although not as high as in the record 2015 year, which is a bit of an outlier.  The fall in gold exports to the mainland from Hong Kong is because every year more and more of mainland China’s gold imports are arriving there directly through cities like Beijing and Shanghai and completely bypassing Hong Kong altogether.  A great example of this has been the comparative levels of Swiss gold exports to China and Hong Kong (see: Big Surge in Swiss gold exports to India and China for the most recent figures).  Switzerland is one of the biggest gold exporters to China and Hong Kong and over the past two years its exports to the Chinese mainland have dwarfed those going into Hong Kong.