This is all getting like something of a broken record repeating the same song over and over again.  Once again the Chinese Central Bank has reported a zero increase in its gold reserves to the IMF and, once again, we find this hard to believe.  To see why we find this on the unbelievable side see this chart of reported Chinese gold reserves so far this century from Nick Laird’s www.goldchartsrus.com website: 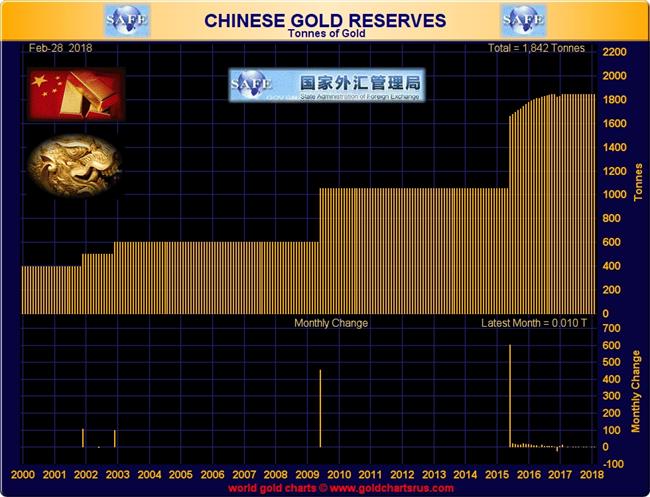 The growth in Chinese Gold reserves as reported to the IMF

As can be seen from the chart, apart from the period from July 2015 to October 2016, China only reported its gold reserve increases at various multi-year intervals (mostly in around five or six year accumulations).  The only period of monthly reported rises was in the runup to the Chinese currency being accepted as a constituent of the IMF’s Special Drawing Rights (SDR) basket of currencies, after which it seems to have reverted to its old pattern of only reporting gold reserve rises when it has suited it to do so. China thus has a long term track record of not reporting its real monthly gold reserve holdings.

China justifies this by saying this gold, which has been being accumulated, is being held in accounts which are not reportable to the IMF and the total figure only reported when it is moved into its official foreign exchange holdings account,  But whether this gold sits in government coffers, or in the holdings of the state-owned commercial banks, is obscured by Chinese secrecy.  If the latter this could go some way to explaining the substantial anomaly between Chinese gold consumption figures as estimated by the major consultancies and the overall gold flow into the country as represented by known gold imports plus China’s own gold production, plus an allowance for scrap.  together this all totals around two-times the consultancies’ consumption calculations.

So the latest reported zero increase in the nation’s gold reserves now leaves China in sixth place among national gold holders with Russia having moved above China with its reported February additions to its gold holdings (See: Russia now World no. 5 national gold holder – but is it?). But as we speculated in that article we reckon the Chinese reported figure to be something of a fiction and we now estimate the country’s likely total gold holding immediately accessible to the government  as probably amounting to north of 5,000 tonnes. It could even rival the USA’s reported gold holding of 8,133.5 tonnes.  Both China and Russia are assumed to be building up their national gold reserve figures as they see gold as playing an increasingly important role in any overall future global financial reset.