We still consider Shanghai Gold Exchange (SGE) gold withdrawal data the best comparable measure of the nation’s gold demand year on year and for 2018 the annual total was a little higher than in 2017 or 2016, but still well short of the record figure reported in 2015.  However as can be seen from the table below, this demand slipped quite significantly in the final four months of 2018 compared with a year earlier and in the last three months of the year  compared with 2017, although ended the year marginally higher than in both prior years. (See bar chart of full year figures).  The annual total though still ended up below the figures for 2013 and 2014 as well as comfortably below the 2015 figure. 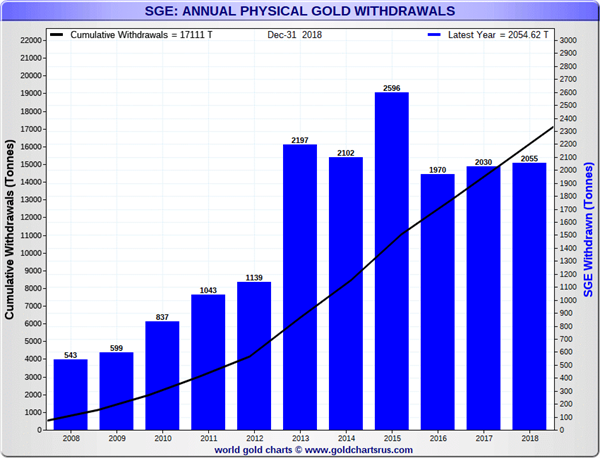 The faltering in the total gold demand level though ties in with a slowing down of the Chinese economy - particularly over the past three or four months since the onset of the President Trump initiated ‘trade war’ with the U.S.  - so the downturn shouldn’t be a surprise.  Indeed the nation’s gold demand is holding up quite well under the circumstances, but one might suspect a further slowing of gold demand in the current year.  It will thus be particularly interesting to see 2019 monthly data as it is announced.  To an extent the ramifications of the slowing of economic growth will be being offset by the ever-continuing rise in that proportion of the Chinese population achieving middle class status.  The Chinese middle class has a propensity for saving, perhaps not quite so apparent in the current equivalent Western segment, and precious metals play an important role in ongoing wealth protection in Chinese culture.

Chinese demand remains vitally important in the gold supply and demand equation so any slowing down could be significant, but the growth in the country’s middle classes has to be an important factor in keeping the balance reasonably strong.

This is coming at a time when new mined gold production may well not be growing any more.  Peak gold may, or may not, actually be with us, but at worst it is exceedingly close so in our book global gold production is just about flat.  Given the slowdown in exploration activity and the lack of big new discoveries, this situation is unlikely to change without stimulation from a huge rise in the gold price which might make some of the big marginal unexploited gold resources economic to mine.  But even if this comes about it could be a number of years before some of these could be brought into production.

Otherwise, somewhat counter-intuitively, rising gold prices could lead to lower output.  This comes about by making existing lower grade resources at existing operations viable for profitable processing.  And if this occurs without plant expansions, putting lower grade material through the mill leads to lower, not higher, output and an initial fall until new mines and expansions can come on stream.