LAWRIE WILLIAMS : Chinese gold demand may be slipping, but only just

The latest figures for Shanghai Gold Exchange (SGE) monthly gold withdrawals are in (for October) and they show a marginal downturn from those for the same month a year earlier.  But then October can be an anomalous month given the week long Golden Week holiday at the beginning of the month during which time the SGE is closed for business so perhaps not too much should be read into the latest data.

Withdrawals for the year to date are still marginally up on a year earlier, so we will have to wait for November’s figures (usually a strong month) to see if there is any specific trend downwards yet.  A Table showing the monthly gold withdrawals data year to date, with comparative figures for the prior two years, is shown below: 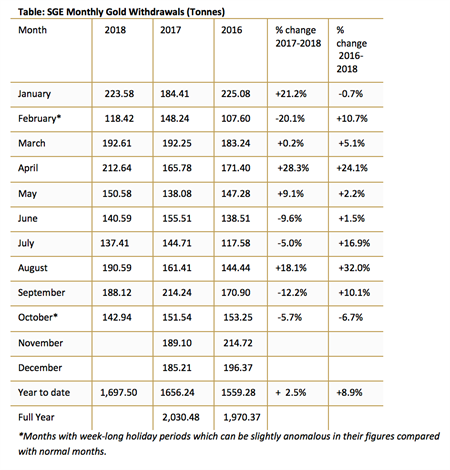 At the moment China is still on track for another2,000 tonne plus gold withdrawals year, but if full year demand slips a little we shouldn’t be too surprised.  Gold imports from Switzerland and Hong Kong – the two principal published sources for China’s direct gold imports, both appear to be slipping a little and the U.S.-imposed tariffs will be having some adverse impacts on China’s domestic economy which may be leading to a reduction  in disposable income among the gold-buying public..  The country’s own gold production is reported to be slipping too as tighter environmental controls are being implemented leading to reduced production, and even closures, at some of the country’s own gold mines.

We continue to equate SGE gold withdrawal levels to our own estimate of China’s gold demand, although some of the prominent gold consultancies may disagree and come up with lower figures.  However SGE gold withdrawal figures consistently would seem to equate far closer to known Chinese gold imports, plus the country’s own production plus an allowance for scrap conversion than do the consultancies’ published demand estimates.  At the very least SGE gold withdrawals have to represent a measure of the country’s gold flows which is comparable month on month and year on year with previous years.