Switzerland has announced its gold imports and exports for September and while imports are from the usual suspects there are some important anomalies from the normal pattern in the country’s September gold export figures.

Imports totalling around 177.8 tonnes largely came from the UK (91.8 tonnes – or a little over half the total) and the USA (33.1 tonnes) neither being abnormal numbers, with the UK being the centre of the global gold trade and the USA being the world’s fourth largest gold producer. The balance came from relatively small amounts from other gold producing nations.

The real surprises came in the gold export recipients. Mainland China topped the list comfortably with 37.5 tonnes out of total gold exports for the month of 119.4 tonnes but the HUGE surprise in the figures was that during September Switzerland, apparently, the figures we were presented with, suggested that Switzerland exported zero gold to both India and Hong Kong.  We were however fed incorrect data and now we have updated data which corrects the anomalies.  The figures were erroneous.  In fact exports to India were indeed down very substantially to 16.6 tonnes but Hong Kong still took a respectable 28.9 tonnes.  A graphic of the real figures is shown below: 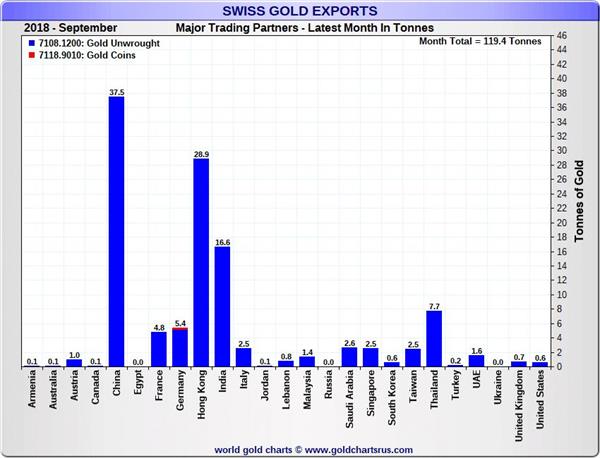 However, some of the other Swiss gold recipients in September are indeed really anomalous as they also usually fall outside the country’s gold export listings; notably Hungary which imported 28.9 tonnes as it increased its central bank holdings tenfold (see: Central Bank gold buying – New kids on the block), although Hungary reported this as occurring in the first two weeks of October, but it apparently entered the Swiss export figures in the earlier month. Other big unusual importers were Indonesia (with 16.6 tonnes), the African nations of Ghana (5.2 tonnes), Gabon (4.8 tonnes) and Senegal (2.6 tonnes), while among the normal Swiss gold recipients Thailand (7.7 tonnes), Saudi Arabia (2.6 tonnes) and Taiwan (2.5 tonnes) absorbed larger amounts than normal.

It remains to be seen whether some, or all, of these were adding, like Hungary, to their official gold reserves. If they are this should become apparent when the IMF publishes its next couple of its table of changes in world gold reserves which is always published in the data section of the World Gold Council’s website (http://www.gold.org).

Interestingly the gold price soared this morning reaching $1,240.80 at one time and as I write it is approaching this inetrim high point, up from $1,221.70 when the U.S. market closed yesterday. This may also have been prompted by a big plunge in general equity markets today with Asian, European and North American markets all losing substantial ground.

Is the oft-predicted plunge in equity prices beginning – and if so are we seeing a move into gold as a safe haven? The dollar index also appears to be slipping a little and yesterday again saw inflows into the big gold and silver ETFs. Perhaps precious metals are coming back into favour again?