We are all used to assessing movements in the price of gold in U.S. dollar terms, and by this measure gold has not been acting as a great wealth protector in the past month or so.  The dollar has been advancing in value in global currency markets, while the gold price has been seemingly more than reluctant to follow this upwards path.  Thus in terms of wealth preservation, to those who look to the gold price through greenback tinted spectacles, gold has been something of a disappointment, having fallen in value in U.S. dollar terms by over 4% since the beginning of 2022.  That’s actually not too bad a performance considering all the major stock indexes are down by multiples of that amount.  The Dow is down around 12% year to date, the S&P 500 down  over 15% and the NASDAQ some 23%. 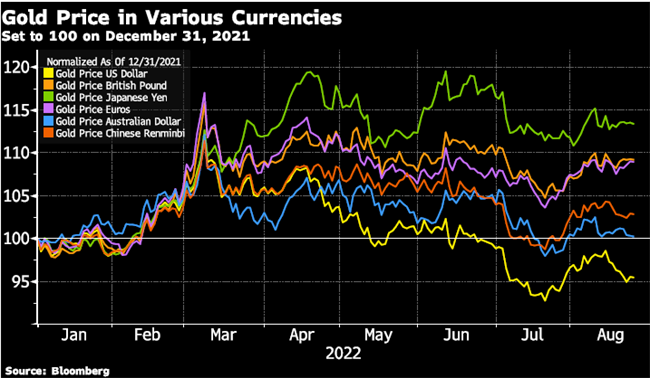 But in this article we’re primarily looking at the gold price performance in U.S. dollar terms.  In many other key major global currencies, as can be seen in the Bloomberg chart above, the gold price has actually risen this year so far – in the Japanese yen for example quite substantially so by close on 14%.  Even in the Swiss Franc (not shown in the chart), gold is up over 1% year-to-date. All these currencies have fallen in value against the dollar.  Indeed in some weaker currencies, like the Argentinian peso for example the price of gold has risen by over 30% since the beginning of the year.  Research published by www.goldprice.org shows that gold’s value has appreciated year on year on average by between 6 and 11% for virtually all major currencies over the past 15 years.  Even in U.S. dollar terms it has averaged a rise of 7.7% over this period.  Not bad for a pet rock!

So don’t assess gold’s performance in the short term against a single currency like the U.S. dollar, even if its price is normally quoted in dollar terms.  The U.S. dollar is itself a variable and if it falls back again, as some analysts believe it will, particularly if the U.S. economy is seen as moving into recession, then the dollar gold price would probably rise accordingly to match the greenback’s decline in purchasing power – not to mention a continuing likely appreciation against your own domestic currency.  What appears to be a price fall as quoted in U.S. dollar terms may hide a price rise in your own domestic situation assuming you bought the metal in your own monetary unit.

True, if you offloaded any gold holdings in the weeks immediately after Russia invaded Ukraine, in retrospect you would have made good gains in any currency at the time, but most holders hang on to the yellow metal as a long term investment/wealth protector.  Like any investment, it has its ups and downs, but overall, as the www.goldprice.org research demonstrates, it tends to serve this purpose well over time.  If you hold gold look upon it primarily as insurance against economic collapse.  There are many out there who will tell you that its price will go through the roof, but a majority of these will have almost certainly been singing the same tune for many years and it hasn’t happened yet.  Maybe they’ll be right some day, but don’t bank on it!