LAWRIE WILLIAMS: Don’t pay too much for your silver

Silver, the devil’s metal, often appears to be much more volatile in price than gold, although it tends to move up and down with the latter, but in a more exaggerated manner, despite its demand nowadays being largely from the industrial sector.  There always appears to be arguments among analysts over the metals’ supply/demand fundamentals and the price can move according to which premise gains general acceptance.

Currently, many analysts and dealers will tell you that there’s a major supply shortage in the silver market, and substantial premiums are consequently being charged even on quite big silver bars such as 100 ounce units.  However, others disagree and say that premiums on bars of this size should only be between two and three percent.  Jeff Christian of New York’s CPM Group, whose opinion I rate highly, is one of the latter saying that there is plenty of silver available if one shops around.  He admits though that much higher premiums are likely to be applied to smaller units like one ounce silver coins and bars, though.

According to Christian, U.S. Silver Eagles typically carry around a 10% - 15% premium in normal or typical markets, but jump higher – sometimes spectacularly so - with some regularity reflecting waves of increased investor demand for these coins, or on occasions where there are coin supply interruptions at the manufacturing end. It’s never an issue of insufficient silver bullion to make the coins, though. It virtually always is an issue within the manufacturing process with certain issues related to the way that refineries and mints operate and manage their production output.

The following graphic from the CPM Group gives an idea of the volatility in silver premiums – particularly for the smaller units here represented by U.S. Silver Eagles.  Note the sharp rise in premiums last year, when the increase had to do with increased demand 13 months ago at a time when refineries and mints had shut down for a time and then restarted at 1/3 capacity,  There has been another sharp rise this year when the putative, but shortlived.  ‘short squeeze’ pushed demand up above a level where dealers had difficulties in meeting the flood of metal requests. 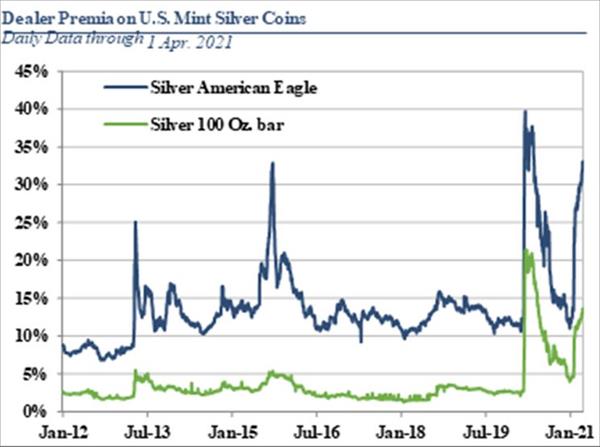 The CPM Group’s annual Silver Survey comes out in about 3 weeks’ time – as will similar assessments from Metals Focus and GFMS, the other two metals consultancies which cover the silver market in depth.  This confluence of major silver reports may provide investment advice overkill, but it will be interesting to compare and contrast their respective findings.

So what can one glean from this in relation to silver bullion investment?  The CPM chart shows that when silver price premiums have spiked upward in the past, these spikes have never been of long duration and price premiums have returned to their norms – indeed so much so that the fall in premiums may well have more than counterbalanced any appreciation in the bullion price itself.  These spikes have been temporary and the investor may well be better off delaying purchases until the euphoria which has driven the prices up in the first place has receded to more normal levels.

Meanwhile we re-iterate that things are looking positive for gold.  It opened higher in Europe Monday– and rose to to more than $1,780 before being brought bank down when the U.S. market opened.  We suggested in our last post that we anticipate the gold price consolidating in the $1,770s and then making a run at $1,800.  True it has fallen below $1,770 overnight Tuesday but the premise of a consolidation period still holds – for now at least,  Given silver’s propensity to ride gold’s coattails, then things look positive here too with $26 again being comfortably in sight, and this time it may well stay there.