Ever increasingly I’m siding with those who believe in a rigged market in gold – and by gold’s leading impact on the other precious metals too.  We have just seen yet another instance of a totally insane volume of notional gold hitting the futures markets, surely designed to stop any positive momentum for gold in its tracks.  I say insane because in a true fair market no-one in their right minds would put so much on the market in such a short space of time even if it involves only paper gold rather than actual bullion.

Yesterday’s www.kitco.com  chart – reproduced below – would seem to say it all.  Gold had been trading in Europe above the $1,284 level - not great for the gold aficionados but perhaps sufficient to suggest a degree of positive momentum .  But almost immediately after the COMEX opened, a stupendous amount of paper gold (over $4 billion worth - over 3 million ounces) was ’dumped’ on the futures market in a matter of minutes.  That this huge paper ‘sale’ only knocked the price back just over $10 will give the gold investor some comfort, but it certainly had the intended effect of putting a sharp dent in precious metals price prospects – at least until the next time. 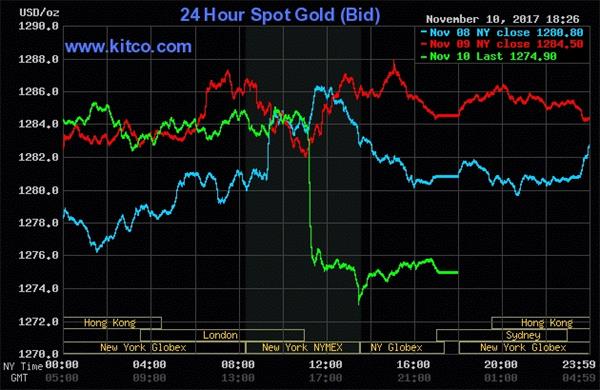 Chart courtesy of www.kitco.com via www.edsteergoldandsilver.com

These ‘flash crashes’ in the precious metals prices seem to be happening every time we start to see positive moves in the gold price.  That cannot be coincidental!  Ed Steer, who publishes a daily newsletter to subscribers called it “a picture-postcard waterfall decline” – an apt description looking at the above chart.  Ed places the latest ‘flash crash’ firmly at the hands of JP Morgan and the other bullion banks which hold large short positions in the precious metals – particularly in gold and silver and thus have a vested interest in keeping the price suppressed.  Ed’s views are well known on market manipulation and are not seen as reality by some precious metals market mainstream observers, but these ‘coincidental’ flash crashes do seem increasingly to support his viewpoint as a counter argument to what might be considered the mainstream financial establishment, which is very much in denial – probably because such manipulation appears to be an integral part of doing business in the sector.

The evidence of large scale market manipulation is almost overwhelming.  There have been a number of very high profile admissions of guilt on manipulation in a myriad of markets – including the gold market – and we suspect these are but the tip of the iceberg.

Back in April last year the Zero Hedge website, always an interesting source of often controversial financial facts and opinions, published an article referencing countless proven admissions of manipulation by the world’s major banks across a large number of different markets.  In a number of cases seemingly large fines were imposed but these will have been peanuts compared with the amounts of money made.  In other words the suggestion is that the banks will try, and usually succeed, in manipulating virtually all markets in their favour, and if they get caught out this is just seen as being a cost of doing business.  (See article: Every Single Bloody Market Is Manipulated ... See For Yourself).

But, as noted above, the fact that gold fell by only $10 or so despite the huge ‘sales’ volumes involved might give heart to the precious metals investment sector.  True, gold ended the week at only around $1,275 an ounce and silver at a little below $17, it wouldn’t seem to be unreasonable that both could see a small recovery next week once the ramifications of the ‘flash crash’ are taken into account – subject of course to any further moves to suppress the price by the big money seemingly determined to control it.  Gold is still up a little over 10% year to date, silver up over 6%, platinum just short of 3% and palladium a massive 45%.   All is not lost for the precious metals investor – in a normal year these wouldn’t be bad returns, but in a year when the Dow is up nearly 18% and the S&P500 14%, precious metals investors may feel they have missed the boat – unless of course they are into palladium.  But the equities markets are looking increasingly vulnerable.  With equity crash predictions abounding maybe precious metals are a better bet for the future – manipulation or not!