Well gold has regained some of the ground lost ahead of this week’s FOMC meeting and the decision to leave interest rates unchanged – apparently by a 7-3 majority.  The gold price had been driven down by a series of statements from various Fed officials and FOMC members suggesting it would take a more aggressive attitude towards raising interest rates, but in the event fear of any monetary tightening possibly triggering a collapse in the U.S. domestic stock market prevailed (we doubt gold came into the discussions at all) and the interest rate raising can was kicked down the road once again.  December is now seen as the likely date for a small rate rise announcement, providing data is supportive thereof, but there’s no certainty that this will actually be the case given the erratic performances of various U.S. economic indicators, even though some economists will tell you that there’s little relation between government figures and the real world situation.

It is interesting thus to take account of the various alternate charts published by John Williams’ Shadowstats.com website which, in general,  compares official government figures as they are published now with the site’s alternative figured mostly based on the way the same stats were calculated in the past.

These, for example put real U.S. inflation at more than double the official government figures and much more in line with real consumer experience: 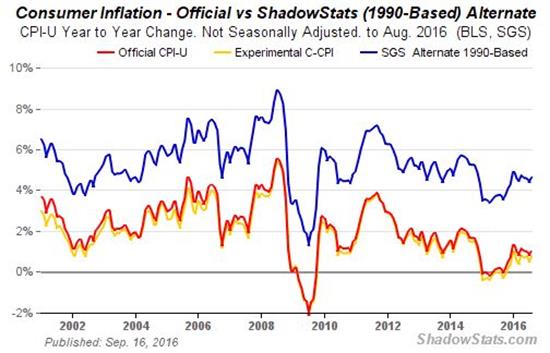 They also put unemployment statistics hugely above official figures which manage to ignore various categories of those unable, or unwilling, to find gainful employment: 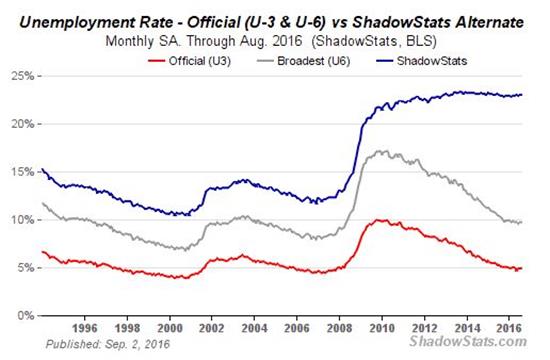 And U.S. GDP growth is seen as well below the current official figures suggesting the U.S. economy has been contracting in most years since the start of the current century: 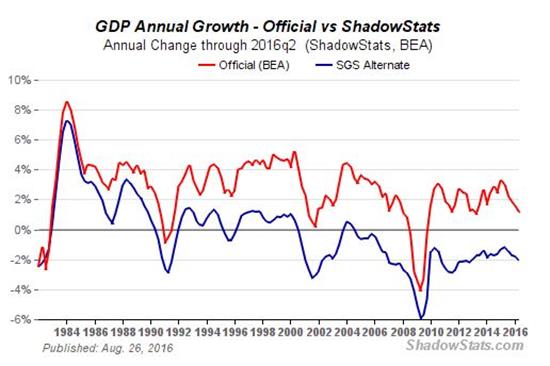 All the above charts published courtesy of shadowstats.com

The genesis of these charts is explained in much more detail on the shadowstats.com website, but suffice it say they all suggest that the American economy remains in serious decline and that Fed easing and low to negative real interest rates have had little or no positive effect on generating any kind of recovery.

So what lies ahead?  On the basis of the shadowstats charts the U.S. economic picture is far, far worse than the Fed and official U.S. Government statistics would have us believe.  Indeed they may well make the case for disbanding the Fed altogether as a totally ineffectual body in terms of its mandate of maximizing employment, stabilizing prices, and moderating long-term interest rates.  Fed statements do suggest that it is indeed carrying out this mandate to the letter, quoting its own data as supporting this, but the alternate stats noted above suggest abject failure on virtually all counts.

We have expressed here beforehand our puzzlement of the effects a rumoured tiny rate increase seems to have on the gold price.  It is, to us, illogical given that a 25 basis point rise will still effectively leave interest rates in negative territory, which should be positive for gold in terms of holding a relatively stable asset which should not be continually diminished in value by negative rates.  But the markets, presumably aided by the big money institutions which, for various reasons, seem to want to keep the gold genie under tight control, seem to think otherwise.  It was notable that when gold started to rise yesterday after the FOMC meeting had ended and Janet Yellen was in full flow at the ensuing press conference that some massive sell orders on the futures markets did manage to cap gold’s price rise – but for how long?

There may be some adverse movement in gold ahead of the Fed’s November meeting, in case it should spring a surprise rate rise on us, but given the timing only a week ahead of the Presidential election this may be unlikely, but December is different.  There will be strong expectations of a small rate rise at the December meeting scheduled for the 13th and 14th.  The spanner in the works here could be the outcome of the Presidential election a month earlier – particularly if there is a Trump victory with all the uncertainty that would engender.

While logic, and the odds, favour a Clinton win, the UK referendum vote, which once again proved the polls wrong, could throw up warning signals for taking a Clinton victory for granted.  Polls in the so-called battleground states seem to be narrowing and the amount of satirical anti-Trump commentary out there may well prompt supporters, on being polled, to deny they will vote for him, but still ultimately turn out and vote the GOP ticket.  This one could go down to the wire.