LAWRIE WILLIAMS: Gold - A metal for all currencies

Ronni Stoeferle and Mark Valek’s In Gold we Trust annual treatise is probably the gold investor’s most valuable free publication available to all who access the Incrementum AG website.  While the full publication runs to some 230 pages in length and is packed with data and opinion, a summary publication which incorporates the full report’s highlights, and is in an easier-to-digest 45 pages is even more readily available.

In Gold we Trust has now been published for 12 years.  The original reports were published by Austria’s Erste Bank, for which Stoeferle, the report’s instigator, worked at the time, but all the more recent issues have come out of Incrementum AG which is an independent investment and asset management company based in Liechtenstein.  The annual report – next issue probably due out at end May – is still in much the same format as at its inception but contrary to the annual publications from Metals Focus (whose next gold report is due out next week), GFMS and CPM which all claim to be gold neutral in terms of forecasting, In Gold we Trust very much toes the Austrian School of Economics line so is largely gold positive.

On reviewing the last report we return again to an updated version of a table therein which bears regurgitating given that most gold price reporting looks at gold only in U.S. dollar terms, but given recent dollar strength, the price in most other currencies has performed rather better – in many cases considerably better!  The table looks at gold’s performance in a whole swathe of currencies since the turn of the millennium and shows that the only down year for gold across the board was in 2013 – the year the yellow metal suffered most after it hit a new high in 2011.  The table is reproduced below: 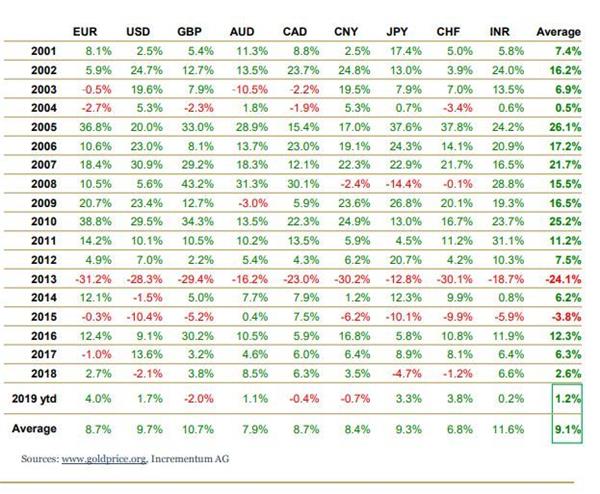 The table serves to emphasise the value of holding some gold in one’s portfolio in one’s own domestic currency.  Holding gold in any of the tabulated currencies would have seen average annual gains of between 6.8% in the Swiss Franc to 11.6% in the Indian Rupee.  Even in the U.S. the average annual gold investment growth rate has been 9.7% over the past 18 years.

As the latest version of the report notes: “The average performance in this secular bull market is still impressive. For example, the average annual performance from 2001 to 2018 has been +9.40%. During this period, gold has outperformed practically every other asset class, and in particular every currency, despite intermittent, sometimes substantial corrections. In the year to date, the development has been positive as well. Gold is up 0.34% on average.”

So one should never write off gold as a wealth protector – or enhancer – despite some pretty negative media coverage over the years.  This coverage tends to dwell on negatives, but largely ignores the positives and concentrates almost entirely on the U.S. dollar price ignoring other currency performance altogether.  Surprisingly, though, the in Gold we Trust table actually shows that gold has, in reality, performed almost as well in the U.S. dollar as in most other currencies.  One could be forgiven for not realising that from the general media coverage out there!