The below comment on the huge disconnect between the U.S. equities markets and reality from Bill Bonner says it all:  “Stock market investors went howling mad... The last quarter was the best for the Dow Jones in 33 years. But for the economy, it was the worst quarter in history!”

Bill’s sometimes off-the-wall comments on the state of the economy are usually prescient and the above one puts the latest crazy moves in U.S. equities into perspective.  The U.S. stock market no longer seems to be functioning as an indicator of the health of the U.S. economy, despite President Trump’s assurances to the contrary.  It will correct over time and when it does a lot of people will lose a lot of money fast

Thus we still think that booming general equity prices are due for a major correction as the true COVID-19 effect on the global economy is better understood by the general public.  We’d still steer well clear of the equities markets, as are some really big name investors, and despite what we see as some temporary weakness over the past few days we’d still put our faith in gold, and maybe silver, and their respective mining company equities as the best way to protect one’s money from the current equity market disconnect.  Gold tentatively regained $1,800, after ending last week below that key psychological level but is struggling to retain that level this morning – as I write it is a few dollars below the $1,800 level.

Silver has tended to be the star precious metals performer over the past couple of weeks. Moving up through the $19 resistance level with ease initially and the Gold:Silver Ratio (GSR) falling back to the 94 level after several weeks at around 100 or above.  However it too seems to have been unable to stay above $19 an ounce so far today, despite some absolutely enormous recent inflows of silver bullion into the silver ETF sector.

As Frank Holmes points out in his latest blog on the U.S. Global Investors website, gold and silver were easily the best performers amongst the major commodities in the six months to end June – but since then gold has risen further still, and silver will also have made up some of its percentage deficit with gold in the first couple of weeks of July (see graphic below): 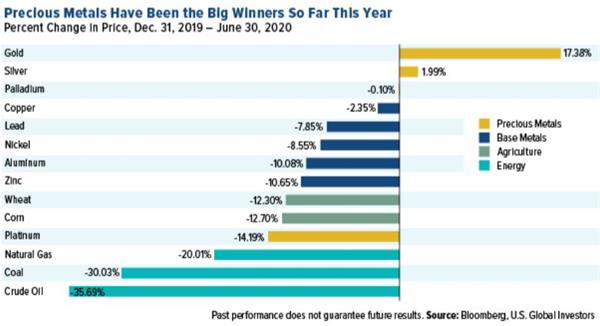 The S&P 500, the broadest measure of the general industrial sector is also down 3.15% year to date despite its (we think totally unjustified) stellar performance since hitting its low point on March 23rd.  In contrast, though, the NASDAQ exchange, which is focused largely on tech stocks is giving gold a bit of s run for its money and is up 14% year to date.  Tech stocks are better placed than general equities during the virus incidence, but we do feel some of these are in bubble territory and it too could come crashing down.  The other major U.S. equity index – the Dow Jones Industrial Average – is down nearly 10% year to date.

We reckon that overall gold and silver will both continue to outperform other commodities and the major equity indexes as the year progresses.  What we think will be mostly dire Q2 corporate sector earnings performances will likely depress the markets quite substantially. Although some of the big tech stocks may be less affected, but are in danger of being dragged down by falls across the board in the other market sectors.

The exceptions, though, should be the gold and silver stocks.  These will all be benefiting quite considerably from higher precious metals prices in the latest quarter given that they were mostly decently profitable already when precious metals prices were much lower.  The higher prices they will have achieved in Q2, and moving into Q3, should provide the icing on the cake.  We are thus a little mystified by the more sluggish performances of the major gold mining indexes, the HUI and XAU, which so far have been moving pari passu with the bullion prices rather than with the much more leveraged earnings potential of the precious metals miners on which they should be based.  The biggest of the precious metals mining majors will only be reporting their Q2 earnings levels at the end of this month or in the first half of August.  Some of the smaller players, which have already announced Q2 figures have been seeing some quite spectacular earnings rises.

So, if gold and silver succeed in retaining their respective $1,800 and $19 levels they could well both go on to better levels in the weeks and months ahead.  Meanwhile we anticipate that their respective mining company equities should do even better once their true earnings potentials at the higher metal prices sinks in.  There has been a suggestion in the general equities markets that the only way for stocks is upwards.  We think that those following this mantra may get their fingers severely burned unless they switch into precious metals and their associated  ETFs and equities which look to be set fair for the immediate future.  While the moves to prop up global economies by central banks and governments may be giving short term boosts to the equities markets, the whole global economic system looks precarious at best and it could all come crashing down.  Safe havens will then rule!