LAWRIE WILLIAMS: Gold back above $1,300 - but uncertainly?

On Friday 8th the gold price surged on what might appear to have been some pretty horrendous jobs data in the USA and very briefly touched the $1,300 mark for the first time in a couple of weeks.  But it was not allowed to break out any higher and closed the week around $1.50 below that level. On Monday last week, rather than attack the $1,300 level again the gold price was marked down further, suggesting the markets may have brushed off the extremely weak jobs creation figure as an anomaly - perhaps due to the knock-on effect on the calculation of the latest figures relating to the 35-day government shutdown in December/January.

Would it make another run at $1,300? Well we didn’t have long to wait with the yellow metal closing just above the $1,300 level on the Tuesday and advancing further in Wednesday morning’s trading. Since then it has been yo-yoing above and below the $1,300 level depending on which data the market seizes upon as relevant at the tine.

The Tuesday recovery probably stemmed from a better than anticipated series of retail sales data and a weekend speech by Fed Chair Jerome Powell claiming that the economy is relatively robust and on track with inflation not seen as a problem, but pushing the new buzz word of ‘patience’.  But there was no indication from Powell that the Fed would resume any further tightening in the short to medium term at least.

There would also seem to be other indicators out there that the U.S. may actually be heading for recession - as is much of the rest of the world - some of which problems have been brought on by President Trump’s aggressive ‘trade war’ moves.

I’m an avid reader of Grant Williams’ Things that make you go hmm.. newsletter (www.ttmygh.com) and his latest issue, out last Monday, delves into some of the factors affecting the U.S. economy right now - and it makes for sombre reading if one is an investor in equities relying on growth in the U.S. economy for a secure future.  But perhaps not for gold which tends to do well when the U.S. economy tanks.

Grant spends much of his commentary in his latest issue looking at the serious decline in the U.S. retail sector – he covered the global decline in auto sales in a previous issue - and its portents vis-a-vis the onset of a serious recession.  He notes: “I’ve written about this sector before (TTMYGH May 22, 2016, Re:tail Risk) because it’s incredibly important and the secular shift away from bricks and mortar to online retailing is a phenomenon which is well established. But what if the shift away from bricks and mortar isn’t simply about the move towards online retailing, but instead is a harbinger of harder times ahead (despite the tub-thumping rhetoric about the ‘strength’ of the economy)?”In spite of the slightly better month on month retails sales data of last week, the retail sector overall seems to have been having a pretty torrid time of late.

He then goes on to show that the spate of store closures which is particularly affecting shopping malls across the USA, many of which are closing as a result, is not happening in a vacuum.  Although online shopping is taking much of the blame for store closures the worrying thing for the U.S. economy is that the online shopping phenomenon also appears to be turning sharply down too, which makes the likelihood of a reduced consumption-led recession more likely..  The latest figures available suggest a downturn reminiscent of that in 2008/9 – at least in terms of retail outlet closures and associated job losses – see table below relating to U.S. figures alone from the latest TTMYGH newsletter: 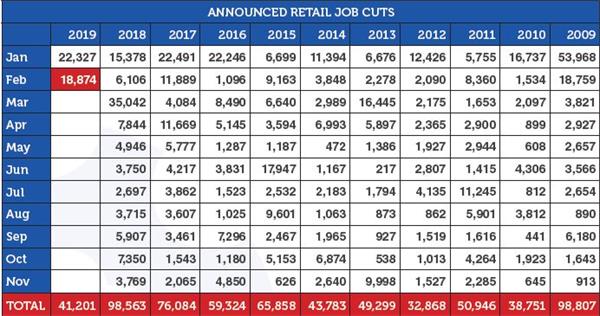 From the above figures it looks like the U.S. may be due for the worst year of retail-related job losses since the last major financial crisis in 2008/9 which is a key indicator of economic downturn, but one that is not appearing in Fed statements, although we assume this has to be being taken into consideration in internal discussions. This may well be the best indicator that all is not well with the U.S. economy despite the tub-thumping rhetoric about the ‘strength’ of the economy as noted above. And, in Williams’ view the rest of the world’s economies may well be faring even worse.

It is notable that despite what might be seen as recent gold price weakness many analysts, who are usually quick to change their future price forecasts when metal prices turn down, are still predicting gold price highs of above $1,400 during the remainder of the current calendar year. Indeed some are upping their forecasts – for example we’ve recently seen a $1,700 forecast from one bank analyst and the general consensus seems to be onwards and upwards for the gold price this year. But perhaps be warned. Gold is unpredictable and last year, after a strong start, the gold price turned down sharply from mid-April onwards, right through to November when it began to pick up a little. It was still slightly down year on year in spite of the recovery. Indeed silver and platinum were also down on the year while palladium and rhodium continued to show strength – strength that has continued into 2019.

So where do we think things will go from here? We are firmly in the bullish camp for gold and silver – at least for the moment. We don’t see economic matters getting any better in the U.S. or globally – and there are still a number of geopolitical flashpoints out there including: North Korea, which is reported to be re-commissioning its main rocket test site; the South China Sea where a possible confrontation between the Chinese and Western navies cannot be ruled out; the Ukraine/Crimea situation where Russia is unlikely to give ground; possible U.S. moves against Iran; and there have to be worries about what the fanatics of the ISIS movement will do as they are defeated on the ground in Syria and Iraq. Terrorist attacks on soft civilian targets from Muslim and anti-Muslim factions seem to be multiplying and are becoming increasingly difficult to foresee and eliminate. With ISIS hardliners potentially on the loose we could see an escalation of such attacks.