LAWRIE WILLIAMS: Gold not allowed to close the week above $1,350.

With potentially conflicting comments re. the weakness of otherwise of The U.S. dollar from U.S. Treasury Secretary Steve Mnuchin and President Trump, the gold market didn’t know which way to run.  Mnuchin had to backtrack, but not particularly convincingly, on his weaker dollar being beneficial to the U.S. economy statement lest he be accused of talking the dollar down in conflict with U.S. assurances that it would not do so.  President Trump’s Davos statement suggested he was in favour of a stronger dollar, contrary to his earlier position on the currency, and following this the dollar rose, and gold fell on Thursday.  But then the former reverted to lower levels in Friday afternoon trade in the U.S. and gold rose back above $1,350 before activity in the futures markets  and gentle dollar support brought gold back to heel and the yellow metal ended the week a fraction under the key $1,350 level.

To an impartial (relatively) external observer of the market the gold price did appear to be trying to rebound back above $1,350 but kept being knocked back again.  Whether it can build sufficient momentum to breach the $1,350 level permanently next week remains to be seen, but one suspects it will do so barring any major adverse news or data.

So far this year precious metals have all done well as Nick Laird’s bar chart from www.goldchartsrus.com shows (below).  The bar chart shows the relative performances of the four major precious metals, the HUI (the NYSE ARCA Gold Bugs index) and Nick’s Silver 7 index tracking seven major silver stocks and the stock indices have generally outperformed the metals which are their key drivers.  As can be seen platinum is by far the best performer year to date, but all have done pretty well given the year is only just over 3 weeks old.  We suspect that Silver and the Silver 7 Index will ultimately outperform the others – however we would have said that in 2017 too – and ever-unpredictable silver ended the year as performing far more poorly than gold, and particularly palladium which was far and away one of the best assets of any type to hold last year. 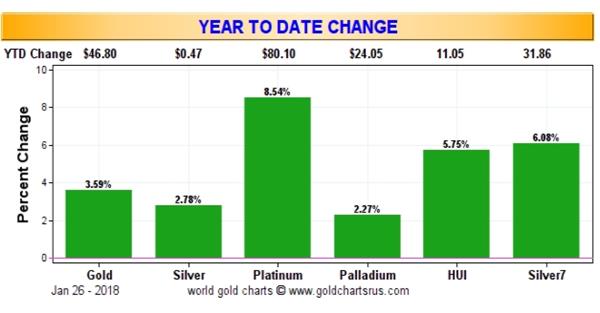 As readers of my writings here will know I am anticipating precious metals to do well this year – except perhaps palladium which may have risen too far too fast in 2017.  But I don’t anticipate any of them doing spectacularly well with rises pretty much in line with gold’s 2017 performance (See:Precious metals price predictions for 2018 – gold, silver, pgms) , but this year stocks may comfortably well outperform the metals assuming the general trajectory is upwards.  The key may well be dollar strength and if the Trump Administration sees exports picking up, and imports falling, due to a weaker dollar, then the engineered decline in the dollar index may be allowed, or even encouraged,  to continue.  This process may well be mitigated though by similar effective currency devaluations among competitor nations or areas as others seek to contain any competitive disadvantage with their own export businesses.