We do seem to be repeating ourselves at frequent intervals of late, but the déjà vu happenings in the gold markets would seem to suggest a significant price breakout by the end of the current year, or perhaps even more likely, early in 2020.  Gold has tended to start each New Year strongly and such a start in 2020 could well see the yellow metal’s price rise to new interim levels, if not yet to see it break through its 2012 highs.

The recent repetitive occurrences have seen the gold price taken back down to the $1,470s or 80s, usually in U.S. markets, but an almost immediate bounce back to the $1,500 level and above in Asian and European markets.  Some liken this to the wash-rinse-repeat spin cycles in a washing machine.  As with a washing machine surely these repeated cycles will come to an end shortly?

Some observers reckon that the regular declines we are seeing almost weekly are orchestrated by big money interventions in the paper gold futures markets where physical metal almost never changes hands.  There have been numerous officially recorded cases of spoofing – whereby huge sales orders are placed, but withdrawn immediately the markets have moved in the direction the spoofers are targeting – this is technically illegal so some of these spoof trades have ended in prosecutions and resultant guilty pleas. The speculation is that these ‘fake’ orders are being placed by the big bullion banks at the behest of central banks and governments who feel that a soaring gold price would represent an indictment of their economic management policies.

Perception is everything in this day and age and policies seem to be aimed at keeping equities markets (perhaps the most visible of indicators) strong at whatever expense.  Never have government debt levels been as high as they are now having risen in support of these aims of keeping the people happy and complacent.  You can, as the famous quote from Abraham Lincoln goes, fool all the people some of the time, and some of the people all the time, but you cannot fool all the people all the time.  Once the majority of the people realise the game being played by the powers that be, as they ultimately will, then gold should take off – perhaps not stratospherically as some predict, but certainly significantly.

The latest gold ‘spin cycle’ took place before and after this past week’s FOMC meeting, where the U.S. Fed, as expected, moved to lower U.S. interest rates by another 25 basis points.  However in the ensuing statement a further cut in December, which many had been anticipating also, appeared to be ruled out as did further cuts in early 2020.  (However the Fed’s track record of keeping to its announced program of forecasts and interest rate cuts or rises has not been great!)  The initial reaction on this news was for gold to be marked down sharply, but it very rapidly recovered to unchanged and then moved up again to settle comfortably above $1,500 by the end of the week.

Yesterday conflicting U.S. data had been having an impact.  The latest Institute of Supply Management (ISM) figures were below expectations and the day before’s Chicago PMI figure was positively alarming, but both these were trumped by some very decent government-issued employment statistics and gold was initially marked down a couple of dollars in consequence, although it has since recovered again.  It has thus ended the week on a positive note once more, despite some optimistic news on possible progress in U.S./China trade talks which might previously have depressed the gold price given that, if confirmed, this may make a Fed December rate cut even less likely.

But don’t necessarily believe government-issued statistics as presenting a totally accurate picture.  Government released unemployment figures were, for example, reworked a few years ago and on the basis of the original assessments the unemployment figure which is rated at an all-time low by the current official data would be hugely higher under the old system at over 20%, compared with the 3.6% current government analysis according to John Williams’ Shadowstats figures.  This is an enormous difference.  But of course the media only reports the latest official numbers.

As we pointed out earlier, sentiment is all a case of perception and the public tends to believe the government’s own ‘propaganda’.  In this respect perhaps the U.S., and other Western governments which appear to produce similarly massaged statistics, are not so different to the planned economy nations whose data tends to be scorned by the Western media!

Reader attention is thus drawn to the graphic below from the hugely interesting www.shadowstats.com website which shows a purported disparity between the U.S. Bureau of Labor Statistics U3 and U6 figures and the old pre-1994 method of calculation. 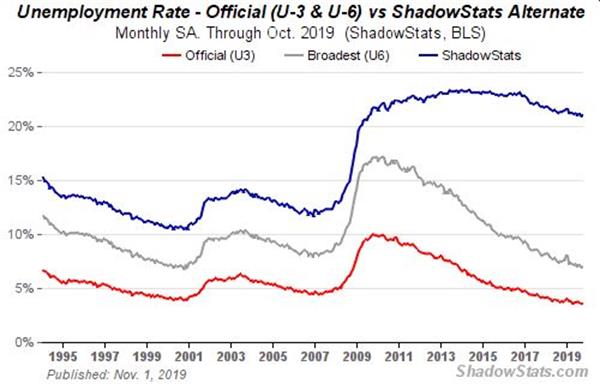 As can be seen there’s an enormous disparity claimed here between the old and new calculations.  Shadowstats explains this thus: “The seasonally-adjusted Alternate Unemployment Rate reflects current unemployment reporting methodology adjusted for Shadowstats Government Statistics-estimated long-term discouraged workers, who were defined out of official existence in 1994. That estimate is added to the Bureau of Labor Statistics (BLS) estimate of U-6 unemployment, which only includes short-term discouraged workers.

Shadowstats also produces figures suggesting there have also been similar adjustments to the way official statistics are calculated for much other government issued data.  Shadowstats thus exposes and analyses what it defines as flaws in current U.S. government economic data and reporting, as well as in certain private-sector numbers, and provides an assessment of underlying economic and financial conditions, net of financial-market and political hype.

Most economists though also find flaws in Shadowstats data as well and dispute their reliability, so who should you believe?  In reality the true figures perhaps lie somewhere between the BLS ones and those of Shadowstats.  The 20% plus unemployment rate suggested by the Shadowstats figures does seem unrealistically high, much as the BLS’s 3.6% seems to be too low.

The U.S. government is not alone in probably massaging statistics in such a way that it presents them in the best possible manner for its own purposes – somewhat similarly to news releases from mining companies which tend to look on the bright side of even the most damning events!

Should the public at large, and the major institutions in particular, begin to understand how all these statistics upon which the markets rely, might be manipulated to present government activity in the best possible manner, then we could also see a sea change in the way ‘safe’ assets are regarded.  But that is probably wishful thinking.

Stock market valuations, for example,  are very much built on hype and belief in government supplied data.  They are currently being built up to unprecedented multiples by the Fed’s policy of low interest rates and easy money.  As long as investors hang on to the belief that the only way is up for the equities markets, the alternative ‘safe’ forms of investment, like gold, will continue to have less appeal.

Even so there seems to be a great chance that gold can build on its current platform and retake the $1,550 level over the next few weeks. On the face of things gold might have faced headwinds on Jay Powell apparently playing down the likelihood of any further short term rate cuts, the apparently strong employment figures and the positive noises coming out regarding trade settlements with China.  But the gold price has shown signs of strength regardless.  This suggests that any even slightly negative data on the U.S. economy, or signs that any trade agreements are, in reality, just hot air, or any moves by the Fed to cut rates further – all highly possible scenarios – could give gold a substantial boost.

Meanwhile the gold price is at, or near, all-time highs in most domestic currencies – but not in the U.S. dollar in which it is generally quoted.  It is thus doing its job well as a wealth protector across much of the world and perhaps that will filter through to the U.S. too.  Some feel the dollar is decidedly overvalued, including President Trump.  Will we see a reset?  If so that could give a big boost to gold, but we see this as unlikely.  If the dollar parity falls back, other countries are likely to devalue similarly to preserve their competitiveness.  Such currency wars could precipitate a race to the bottom, which again would benefit gold hugely.  But we doubt this will happen – in the short to medium term at least.

The ebbs and flows in opinion polls on the UK general election on 12th December, with the likelihood of Brexit taking place by the end of January at the latest if the Conservatives seem to be heading for an overall majority, will also likely have an impact, as will any deterioration in Middle East developments.  All these are far from unlikely events.  What is interesting at the moment too is the pound sterling’s apparent rise against the dollar and the euro as the likelihood of Brexit increases, despite earlier predictions that sterling would crash if Brexit goes ahead!  As we have noted often before, gold tends to thrive on uncertainty and we certainly live in uncertain times economically and geopolitically.