The latest gold import and export figures out of Switzerland make for interesting reading and are detailed in the charts below from Nick Laird’s www.goldchartsrus.com website.

Imports are largely back to the general status quo pattern of previous year after several months of slightly anomalous big imports from some gold consuming nations like Hong Kong and the UAE – these have dropped down to more normal levels with the bulk of imports coming from the UK and smaller coming in  directly from the gold mining countries, much of which comes in as doré bullion from the mines for refining by the Swiss refineries before being shipped out to the consuming nations.  The latest figures still show an important import level from Hong Kong, which may just be profit taking by importers who find themselves with unsold inventory, but with the weaker gold price of late this seems to be at lower levels than the previous few months. 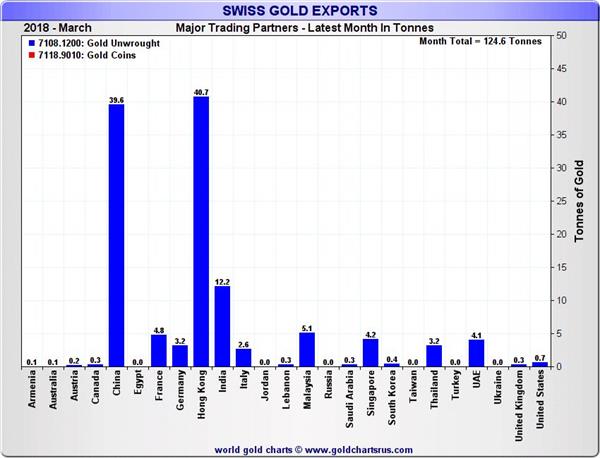 Now if we come to Swiss gold exports in March, what is immediately noticeable is the sharp decline in exports to India – still one of the top three recipients of Swiss gold – and often the leading monthly importer ahead of China and Hong Kong – although these three continue to dominate the Swiss gold export figures.  In March China and Hong Kong (Greater China) took in fully 64.4% between them of Switzerland’s exported gold with the latter taking over as the largest importer – just!  Given that shipments into Hong Kong are mostly designated for onwards shipment into the Chinese mainland, the combined total of 80.3 tonnes suggests that Chinese gold demand is still holding up well after the Chinese New Year holiday.  If one takes the Swiss gold export figures for Mainland China and Hong Kong combined for the current year they come in at 65.6 tonnes in January, 86.5 tonnes in February and 80.3 tonnes in March, so holding up fairly well.  Reports have also just come in of mainland China net importing 59.4 tonnes of gold from Hong Kong in March, up nearly 79% on February,  which is something of a confirmation of the big lift in the Swiss figure to the autonomous Territory.. 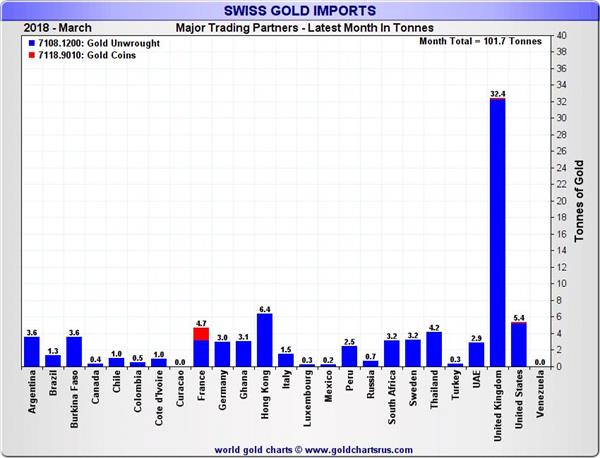 India on the other hand has seen something of a major decline in Swiss gold imports so far this year, but this will also be partly due to a rise in domestic gold refining capacity.    Swiss gold exports to India for the first three months of the year have been 14.7 tonnes in January, 28.2 tonnes in February and 12.2 tonnes in March - that’s a total of only 55.1 tonnes for the quarter as against around 129 tonnes for Q1 2017.  Overall gold import figures for the county which used to be the world’s No.1 gold consumer are down by 32% in Q1 according to figures from GFMS but demand was expected to pick up in the current month with the onset of the wedding season and last week’s Akshaya Tritya festival, although reports on related gold demand have been somewhat mixed..

Reuters reports an Indian bullion dealer as commenting that “Demand will improve if prices remain stable at the current level. Many price sensitive consumers have postponed purchases.”   The Indian gold market does have a reputation as being price sensitive, but eventually picks up once it sees higher prices as sustainable.