The latest announcement from Switzerland of its May gold imports and exports show that the gold export amounts flowing directly to the Chinese mainland and via Hong Kong (totalling 63.4 tonnes) account for almost 55% of the total on their own.  Indian exports were quite weak though at only 15.7 tonnes.

Exports to Asia and the Middle East totalling 99.2 tonnes accounted for 85.7% of Swiss gold exports once again emphasising the continuing strength in gold flows from west to east with 92.7% of Swiss gold imports coming from The UK, the USA, France, Germany, Italy and gold producing nations.  Nick Laird’s graphical representations of the latest Swiss gold export and import figures from www.goldchartsrus.com website are reproduced below.  As can also be seen Swiss gold imports and exports last month were pretty much in balance. 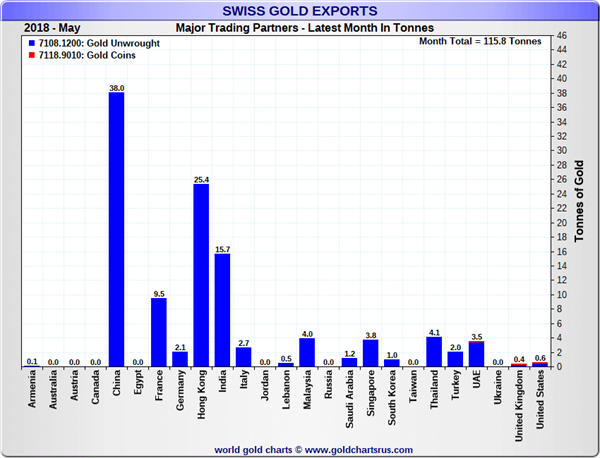 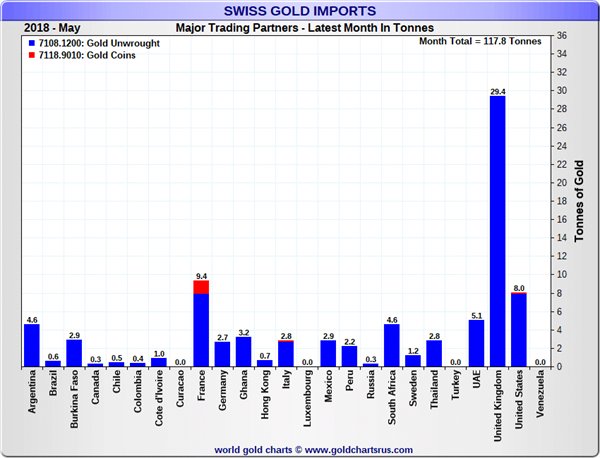 We have commented before on the directional flow of gold from what look to be weaker hands in the West to firmer ones in Asia and the Middle East suggesting that gold demand in the latter nations remains relatively strong.  The Swiss flows are especially significant in the the independent Swiss gold refineries specialise in refining impure gold doré  bullion from mines and remelting and re-refining larger gold bars from Western vaults into the smaller sizes and even higher purities in demand in the eastern markets..

One thing is apparent though from the latest Swiss figures.  Both gold imports and exports are running at lower levels than they were only a couple of years ago.  This will at least in part be due to the construction of new accredited refineries in the East and Middle East – some set up by the Swiss – which will be handling some of this business directly.