LAWRIE WILLIAMS: India back on top for Swiss gold exports in April

It is always interesting to follow the Swiss gold export patterns as an indicator of demand flows across Asia – the destination for a major proportion of the gold refined and re-exported by the world’s top provider of high purity gold.  As an indicator of the high proportion of gold flowing eastwards in this manner check out the bar chart below (from Nick Laird’s www.goldchartsrus.com service which shows the latest breakdown of destination nations for the small European country’s April gold exports.  In that month fully 94% of Swiss gold exports headed for Asia and the Middle East. 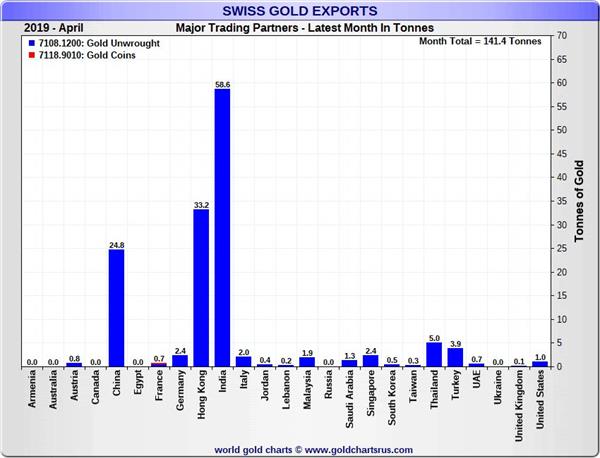 We had been hearing various reports that gold demand had been picking up in India – once the world’s largest gold consumer until comfortably overtaken by China.  The latest figures out of Switzerland serve to confirm this with India, with58.6 tonnes outstripping greater China, where the combination of gold shipped to Mainland China, plus that to Hong Kong (most of which will also be destined for the Chinese mainland) amounted to a marginally smaller 58.0 tonnes.  The fact that India was the biggest recipient – perhaps boosted by demand ahead of the recent elections – will not have gone unnoticed by gold investors and analysts who will see it as a welcome sign that Indian gold demand is at last picking up again!  However a single months’ figures could be anomalous so it will be interesting to see how gold exports from Switzerland to India do in forthcoming months.

Chinese demand may be beginning to slip a little – see China SGE gold withdrawals sharply down in April - so gold investors will see the apparent pick up in Indian demand as an extremely welcome development in the overall global supply/demand balance.  With central bank buying holding up and a seeming slowdown in the recent spate of withdrawals from gold ETFs gold fundamentals look to be marking time, but there is a broad expectation that gold prices and demand may pick up in the second half of the year.  One should bear in mind, though, that this was the position at this time last year and the second half did not see the anticipated big price increase.  Maybe a case of déjà vu all over again in the words of Yogi Berra.

Why are Swiss gold figures so important with respect to gold flows?  Switzerland boasts four major gold refineries which process doré bullion, good delivery large gold bars and gold scrap into the high purity, small sized gold bars, wafers and coins/medallions in demand in Asian and Middle Eastern markets.  The country is easily the world leader in such gold re-refining and exporting so the ebb and flow of Swiss gold imports and exports is followed closely by analysts trying to judge the state of global gold supply and demand.  Over the full year more than 1,000 tonnes of gold are usually processed by Swiss refineries.  Indeed in some years they have processed nearly double that amount!  Recently, however, a number of competing refineries have been springing up around the world – mostly in the Middle and Far East (some owned and run by the Swiss refiners) so the volumes actually refined in Switzerland have fallen back a little.  Even so they remain significant in processing the equivalent of one third to one half the amount of non-Chinese newly mined gold.

Interestingly Nick Laird also passed around charts of the UK’s gold imports and exports for March.  While imports were pretty well spread among gold mining countries for the most part (the biggest individual totals were from Canada, the USA and South Africa).  By far the largest recipients of U.K. gold that month were Mainland China,Turkey and the UAE and, somewhat surprisingly, Azerbaijan. with the 21.7 tonnes to China accounting for around 56% of the total.