The latest detailed Swiss gold export figures show that India has regained the top spot as far as an individual destination is concerned with receipts of 25 tonnes in July.  However greater China – calculated by adding exports to mainland China and those for exports to China’s Hong Kong administrative territory together topped the Indian total with 35.4 tonnes (Mainland China 19.4 tonnes, Hong Kong 15.0 tonnes).  Altogether Asia and the Middle East together accounted for 83% of the total.  See graphic from Nick Laird’s www.goldchartsrus.com website. 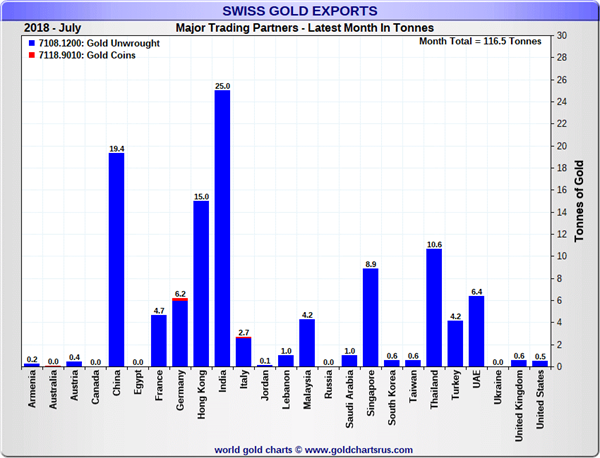 The latest weekly newsletter from precious metals consultancy Metals Focus views a downturn in Swiss gold exports, and imports, this year as being a sign of weak global gold demand, although this may be being contradicted by figures out of the two leading gold consumers, China and India which suggest gold demand is actually holding up in these two nations in comparison with last year.  It remains to be seen though what effect the aggressive trade position being taken by the U.S. trump administration, Fed interest rate positioning and the rise in the dollar (and consequent lower gold price, in dollar terms at least, will have on gold demand in the second half of the year.

The consultancy further notes that outside India and China, Swiss gold exports to other consuming nations remained muted, but this seems to ignore the healthy export figures to countries like Thailand, Malaysia, Singapore and the UAE which all suggest that other Asian demand centres may be taking up some of the slack.  We have also noted in the past that the Swiss imports may well be lipping, not because of weak gold demand, but because of increased competition with new refineries, some owned and operated by the Swiss refining companies, being set up in Asia and the Middle East.

The Metals Focus article also pointed out that lower Swiss gold imports this year (down 23% year on year) are largely due to a sharp decline from traditional consumer nations – notably the UAE and Hong Kong – largely as a result of lower scrap supply – of course some of this scrap supply may well be going to local refineries rather than disappearing altogether.  By contrast, the consultancy notes, imports from most gold producing countries recorded small gains or remained steady, broadly in line with the consultancy’s own forecast that global gold production will grow further in 2018 – perhaps not by very much, but another indicator that peak gold may not be quite with us yet.