Swiss gold exports always provide an excellent pointer to the demand situation in key Asian markets in particular.  The country’s four major gold refineries specialise in converting larger gold bars, doré bullion from mines and gold scrap into the high purity and sizes most in demand in the consumer marketplace.  The Swiss precious metals refineries have a strong history of producing this high tenor gold and in some years their output amounts to an equivalent of over 50% of global new mined gold supply – in other words they are hugely significant in terms of overall global gold supply destination analysis.

For August, Switzerland exported 117.9 tonnes of re-refined gold with well over half (70.8 tonnes) destined for India.  The second highest recipient was China and Hong Kong combined which received 20.3 tonnes.  Altogether Asian and Middle Eastern nations received 98.4 tonnes, or 83.5% of Swiss gold exports in August serving to emphasise the overall demand destinations of gold bullion from Western nations to Eastern ones where it is mostly held in stronger hands and thus less prone to being put back into the global gold supply mix. 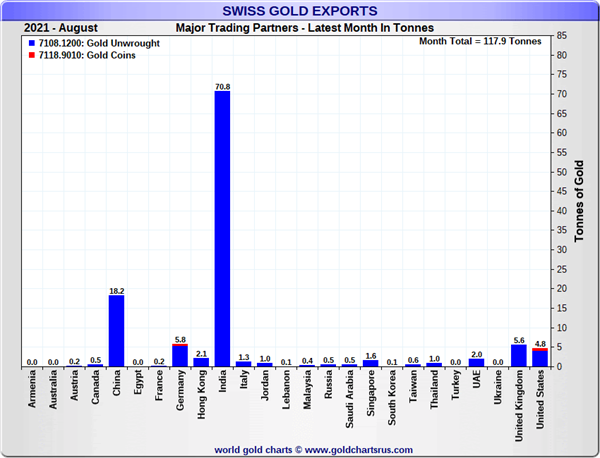 The importance of the high gold export levels to India should not be under-estimated.  August tends to be a strong month for Indian gold imports anyway as dealers stock up ahead of the Wedding and Festival seasons.  However this year August gold exports from Switzerland to India were almost 250% higher than in August 2020 when the country was in the throes of a COVID-19 outbreak.  In contrast Swiss gold exports to China and Hong Kong, although doubling from a year earlier, remained at a low level and were substantially lower by around 6 tonnes than they were in July – a fall of around 23%.

China and India are the world’s two largest gold consumers, with China having overtaken India in first place almost 10 years ago.  However, if Swiss gold export figures so far this year are anything to go by the positions could reverse again which may signify that China has not been recovering from the coronavirus pandemic as fast as government-issued statistics might suggest.  Certainly India will hold the position as the world's largest gold importer, as China produces a substantial amount of gold internally, and exports none of this.  That gives it a strong headstart over India in terms of overall consumption.  The two countries combined are still likely in combination to consume an amount of gold equivalent to 60-70% of global new mined supply.

Outside of Asia and the Middle East the major recipients of the Swiss gold were Germany, the UK and the U.S.  The latter two nations have also been major suppliers of gold to Switzerland, while Germany, in particular, has been recognised as an important gold demand destination given the high consumer price inflation levels being recorded globally, coupled with long term memories of the hyper-inflation which gripped the country in the 1920s .  This makes the population perhaps more sensitive to rising inflation than in most other advanced nations.

Swiss gold imports in August tended to come from the major gold trading nations – the U.S. which supplied the bulk (28%), Hong Kong and the UAE, which will have largely been stock adjustments and recycled gold, together with smaller amounts mostly from the World’s major gold producing countries, which will also have accounted for an important part of the supply from the U.S. as the world’s 4th largest gold producer.  France supplied some 1.8 tonnes of gold coins for remelting and re-refining.