There’s probably no better indicator of the pick-up this year in Indian gold demand, after a dismal 2016, than the levels of Swiss exports to the world’s second most populous nation.  In April, India was again the principal export destination for Swiss re-refined gold, as it has been every month so far this year.  In the four months of the year so far India has imported no less than 167.2 tonnes of gold from the small European nation’s plethora of top-rated gold refiners.  At this rate India will import around 500 tonnes of gold from Switzerland alone and, historically, it only sources a little under half its reported gold imports from Switzerland – in Q1 this year India reported total gold imports of 249 tonnes, of which 47.7%, or 119.2 tonnes came in from Switzerland.

While as my colleague Julian Phillips notes in a recent post on www.lawrieongold.com the early year peak is perhaps already behind us, ahead of the monsoon season, but then gold demand tends to pick up again from September on as the harvest comes in, and ahead of the Dhanteras and Diwali festivals in October and then again with peak wedding season coming in in November and December.  Indian Hindu weddings tend to take place on auspicious dates throughout the year apart from from mid-July to end-October – Chaturmas – a period deemed inauspicious for Hindu weddings.

Julian Phillips thus puts estimated Indian gold demand this year as likely being around 1,000 tonnes plus, although this would likely be boosted by smuggled metal, while the World Gold Council (WGC) put India’s consumer demand last year at 675.5 tonnes.  There may be an element of the jewellery sector restocking ahead of an expected Goods and Services Tax imposition due to come in in mid-year which could reduce second half imports, but regardless it looks as though Indian demand is due for a major pick-up this year which will enhance the yellow metal’s fundamentals.

But let’s take a closer look at the latest Swiss gold export levels courtesy of the latest chart from Nick Laird’s www.goldchartsrus.com  website from Australia. 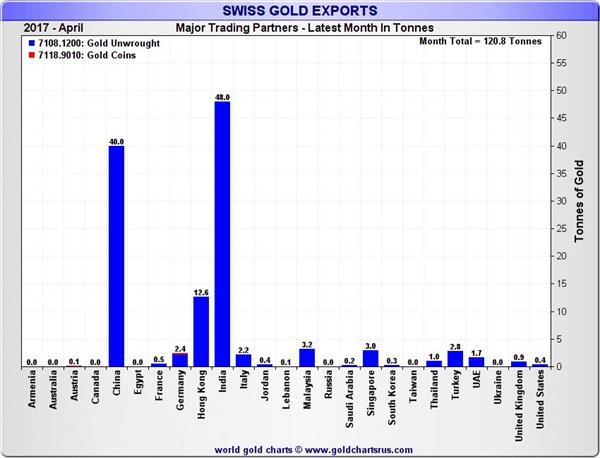 Once again the chart demonstrates a couple of things we have been emphasising in the past.  First and foremost is that comfortably over 90% of Swiss gold exports are headed for Asia and the Middle East, with India and greater China accounting for over 80% alone.  Secondly it is noticeable that the volume of Swiss gold headed directly into mainland China is substantially more than that heading into Hong Kong which further emphasises the point that movements of gold in and out of Hong Kong can no longer in any way be considered a proxy for total Chinese demand.  While the Swiss percentages may not show the whole picture as other gold exporting nations may well still be routing their gold sales destined for mainland China through the former British Crown Colony, it is unlikely that this can nowadays account for much more than half the total mainland China import levels – if that.

The Swiss gold import figures also continue to show an interesting trend.  Out of a total of 131.3 tonnes of gold imported some of the largest amounts come from normally gold consuming states – the UAE, Hong Kong and Thailand which between them accounted for a little over half the total of Swiss gold imports.  Indeed Hong Kong and Thailand were actually net exporters of gold to Switzerland in April.  We can only assume that these distortions in the gold flow patterns are due to gold traders and fabricators taking account of rising gold prices and re-exporting excess inventory, or unsold jewellery and artefacts back to Switzerland for remelting and re-refining back to perhaps more in-demand small metric sized bars and coins.