India has now released its official figure for gold imports in August.  Prior non-official estimates had put this at 140 tonnes and the official figure is a close 138 tonnes.  Now we also have an unofficial estimate for September of a significantly lower 67 tonnes and while some have seen this as an indicator of Indian gold imports tanking – if one looks at the latest chart from Nick Laird’s Sharelynx.com site showing month by month imports for the past five years up until August, one can also see that Indian monthly import figures are hugely variable and 67 tonnes is actually a reasonable figure and certainly doesn’t yet suggest that demand is particularly weak given the very strong August figure – the fifth highest in the past five years. 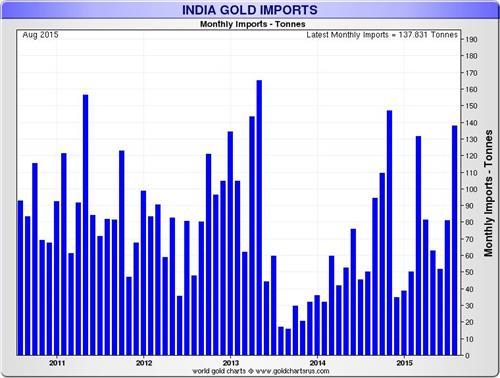 Assuming the September estimates are correct, this will bring Indian gold imports for the first three quarters of the year to a little over 700 tonnes, making the likely total for the year between 900 and 1,000 tonnes - a similar figure to that predicted by Rajesh Khosla, the head of Indian/Swiss gold refining jv MMTC Pamp, back at the beginning of August.  Obviously imports for the final quarter of the year will be significant here, but these can be heavy in the heart of the Indian Festival and wedding seasons which are now getting under way and tend to peak at Dhanteras/Diwali – 9th to 13th of November this year.

Recently too, the latest update for GFMS’s Gold Survey 2015 put India as heading just ahead of China in terms of Q2 gold consumption – picked up heavily by the media as India taking top spot again for the first time since 2013.  But the media also seemingly failed to notice that over the full first half of the year China remained ahead – even on the basis at which GFMS measures consumption in China.

If, however, we look at total gold imports plus domestic gold production as perhaps being the best guide China’s figure for the first three quarters of the year is far ahead of that of India with known imports (i.e. those reported by Hong Kong, Switzerland and the UK) plus domestic gold production coming to around 1300 tonnes for the first nine months of the year.  This is hugely in excess of the Indian figure noted above.  For some further data on the current Chinese figures click on China's Huge 2015 Gold Demand Is Having Little effect on price setting.

Thus Chinese access to new gold is already way ahead of that of India, but the analytical differences lie in the assessment of what does, or does not, constitute ‘consumption’.  In GFMS’s case this is a fairly rigid determination (also followed similarly by rival consultancy Metals Focus - which currently supplies data to the World Gold Council - although this isn’t surprising as Metals Focus’ key China watcher is a former head of GFMS prior to its take-over by Thomson Reuters and presumably follows the same criteria).  So in terms of actual gold flows, China remains very much ahead of India regardless of what the analysts may say about actual ‘consumption’.  Here we agree to disagree!