After a pretty dismal 2016, exacerbated by Prime Minister Modi’s seemingly ill-judged and hasty withdrawal of 1,000 and 500 rupee banknotes from the system in November last year, the lure of gold in India would appear to be picking up again with a little over 89 tonnes of gold imported in February this year.  As can be seen from the www.goldchartsrus.com  graphic reproduced below, Indian gold imports can fluctuate strongly on a month-by-month basis, but if the February figures are matched throughout the year then annual gold imports could be back at around the 1,000 tonne level. 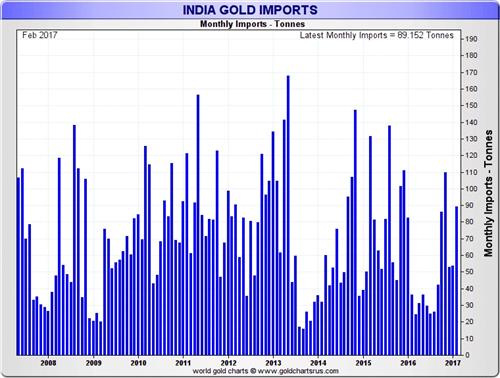 The above figure conflicts with a reported estimate from GFMS that India only imported around 50 tonnes of gold in February, but this figure looks way too low.  GFMS is also reported as suggesting that imports will have slipped back in March as higher gold prices may have deterred buyers.

A report in India’s Economic Times puts total Indian gold imports in 2016 at a miserly 510 tonnes, the lowest in 13 years as a variety of factors depressed the figure including a jewellers strike early in the year and unfulfilled expectations of a lowering of gold import duty in the country’s budget led to a postponement of purchases early in the year.  Going back only a few years, India was comfortably the world’s largest gold importer and consumer, but its position at the top of the table was usurped by China in 2013 – a position it has held ever since.  China’s demand has been slipping last year and this, but we will get a further indication of how it is faring this year with the publication of Shanghai Gold Exchange withdrawal figures for March, due out during the next week.  But even with a rturn to higher Indian demand China is likely to retain top spot during the current year.

Between them the world’s two largest gold consumers are likely to import comfortably well over 2,000 tonnes of gold this year – or around 65% of total new-mined gold during the year.  Gold continues to flow from West to East, with Eastern gold holdings tending to be in much firmer hands – many Western gold investors are more ready to trade gold depending on the vagaries of the gold price, while Eastern holders for the most part tend to be keepers.  This pattern will have a long term effect on the supply/demand balance and will be positive for the gold price, particularly if, and when, global new-mined supply starts to turn downwards as it inevitably will – see our comments on Peak Gold –see: Peak Gold: Not there yet! – CPM Group.  Peak gold may not be with us quite yet but it is inevitable by the end of the decade at the very latest.