LAWRIE WILLIAMS: Is China falling out of love with gold? Does it make any difference?

According to the latest data we have received, the Chinese central bank, The People’s Bank of China, REDUCED its gold holdings in December by a quite substantial 20.98 tonnes – the first time it has reported a reduction in its gold reserves certainly for at least 16 years – probably more.  Over this period it has been adding to its reserves, although sometimes only reporting its rises at five or six year intervals, but the obvious conclusion has been that within these long intervals it has been building its reserves on a month-by-month basis but not reporting this.  Since mid 2015 it has been reporting its gold reserve purchases on a month by month basis, although recently these have fallen to a relative trickle – and the PBoC now appears to have reported a substantial sale – see chart below courtesy of Nick Laird’s www.goldchartsrus.com website: 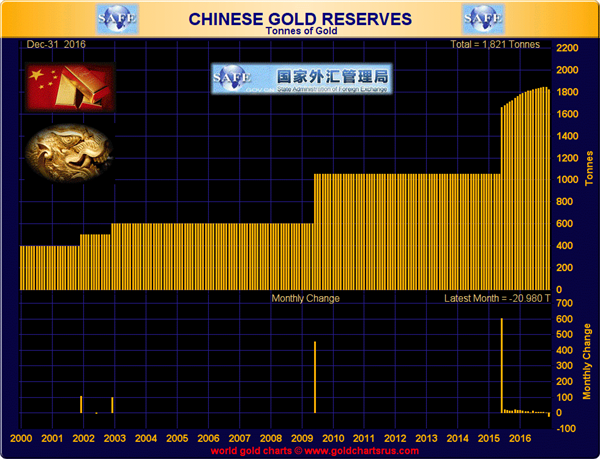 China has been known to play reporting games with its announced gold reserve levels, with gold volumes held in ‘non-reportable’ accounts which have then subsequently been moved into its Forex holdings as reported to the IMF.  The latest PBoC announcement puts the nation’s gold reserve at 1.821 tonnes – down from 1,842.6 tonnes as reported to the IMF for November (there is a marginal disparity here between the two reports, but of less than one tonne).

Now this may be a blip, an accounting correction, or a change in tack by the central bank – we probably won’t know without official comment from the Chinese, or until we see the January 2017 figure in a month’s time – if then - but we do know that Chinese Forex reserves have been under pressure, despite their apparently huge US$3 trillion plus size.  In part, apparently, the strain on Forex reserves has been in an attempt to prevent the yuan falling further against the US dollar and giving more ammunition for President Trump, when he takes office in 10 days time, for branding China as a currency manipulator and taking retaliatory measures accordingly.  Contrary to the Trump stated viewpoint, though,  most economists seem to believe that the yuan is actually overvalued but, as is almost always the case in economics there will also be respected economists with the opposite opinion.

China’s Forex reserves did indeed fall in December, but by a smaller than expected, by $41 billion to remain at $3.01 trillion.  If the yuan remains under pressure, we could well see further sales in the months ahead.

This, of course, drives a coach and horses through the mainstream analysts’ early year estimates of central bank buying during 2016, and only leaves Russia and Kazakhstan as continuing regular gold buyers of any significance.  With reported Indian demand being heavily down this year – although the volume of smuggled gold into that nation makes the true figures difficult to ascertain -  and the fall in SGE withdrawals in China, the projected gold supply/demand balance will have been upset quite considerably during the year.  Thus month by month demand figures from China, India and countries like Turkey, and whether new mined gold output has indeed peaked as some analysts have been predicting, could make 2017 a pretty uncertain year for gold fundamentals.

But overall it appears to be investor sentiment, rather than strict supply/demand fundamentals, which drives the gold price, and enough geopolitical and economic uncertainty ahead may well make true fundamentals relatively irrelevant, at least in the short to medium term.  Gold can, and does, ignore commodity-type fundamentals given its parallel monetary and safe haven insurance role.  It could, therefore, still have a very positive year ahead whether the Chinese are looking at gold from a more pragmatic viewpoint in terms of its utilisation in balancing the books and thus reducing its offtake, or not.  And with China, who knows?  The nation has had years of practice in obscuring its real gold buying – could this just be another case of announcing a fall in its official gold statistics in an attempt to muddy the waters further?