We continue to follow the pattern of Swiss gold imports and exports as an ever continuing snapshot of gold supply and demand patterns worldwide.  As we have noted before country-by-country Swiss gold import and export volumes are hugely indicative of global gold supply and demand patterns, not least because of the high proportion of world gold trade handled by this small European nation’s plethora of major gold refineries which specialise in the re-refining of larger gold bars and doré

bullion from mines into the high purity smaller gold  bars and wafers most in demand in the key Asian gold markets.  (Doré bullion is the term given to the semi-pure alloy of gold, silver and sometimes other impurities created at minesite smelters/refineries and then transported to an independent refinery for further purification into bars of quality and size acceptable on world markets).

Going back a couple of years, these high purity Swiss gold exports had largely been destined for the strong Asian markets of China, Hong Kong and India.  But in the past couple of years these markets had been receiving relatively little of this re-refined gold, and now this seems gto have changed again, with the Indian market in particular receiving a major proportion of this re-refined gold (46% of it in January).  China and Hong Kong both appear to be receiving virtually none of the Swiss product, but reports from the China Gold Association suggest a big upsurge year-on-year in Chinese demand over the Chinese New Year holiday – mostly occurring in the first week in February.  We will have to wait for another month to see whether this is reflected in the Swiss gold export figures for February.

It should also be borne in mind that not only is China itself the world’s largest producer of gold, while India produces virtually none itself so is much more in need of gold imports to meet continuing demand, but China also imports some of its gold from producer nations directly.  This comes from the seemingly ever-increasing Chinese investments in producing gold mines around the world, and also from the not inconsiderable volume of the gold byproduct from base metal mines which ship concentrate to be smelted and refined in China.  While Swiss gold exports don’t reflect these demand and processing changes yet, it is apparent that the Swiss gold import and export figures are gradually reverting to nearer their historic norms. 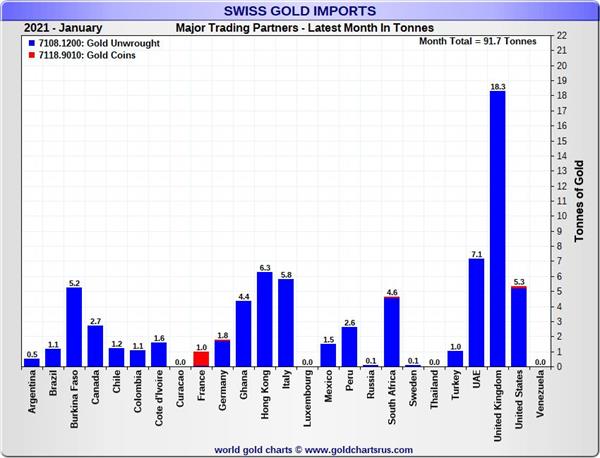 As for January’s Swiss gold imports these were primarily from nations with producing gold mines, apart from the UK which, as the centre of the world’s gold trade, has always been a source of the largest proportion of the gold for Swiss re-refining - of LBMA good delivery gold bars into the marginally higher purity and smaller units in demand most around the rest of the world.  There were still remnants of gold apparently coming from traditional consuming states like the United Arab Emirates, Hong Kong and Italy – presumably due to the running down of excess inventories and scrap supply – but these volumes are diminishing by the month as global gold flows seem to be gradually returning to normal..