Analysts tend to study the monthly volume of Swiss gold imports and exports in some detail as they give a good indication of global gold flows – particularly in terms of flows from West to East, or vice versa.  These gold export figures have shown a huge divergence from the past so far this year with exports to traditional high consuming nations like China and India falling away to near zero, while imports have seen big inflows from some areas which normally would have been major export markets for the Swiss refiners.  Why is this significant?  The flow of gold through the specialist Swiss refineries in a normal year is usually equivalent in volume to between one-third and one-half the total volume of global new mined gold.

The latest Swiss figures for July have now been released and they have only served to confirm the above trends.  In terms of gold exports the July figures show zero gold going to China and Hong Kong and only 0.8 tonnes to India.  In past years these three destination would have accounted for the vast bulk of Swiss gold exports.  This time around the prime destinations for Swiss gold exports were the Western nations which, for the time being at least, comprise the principal demand destinations for consumption of the yellow metal.  The USA was by far the dominant destination for the Swiss exports, followed by France, the UK and Germany.  Turkey came next, but we have already pointed out the huge growth this year in gold demand from the country’s central and commercial banks.  (See: Russia Still Not Buying Gold But Turkey Takes Up The Slack) 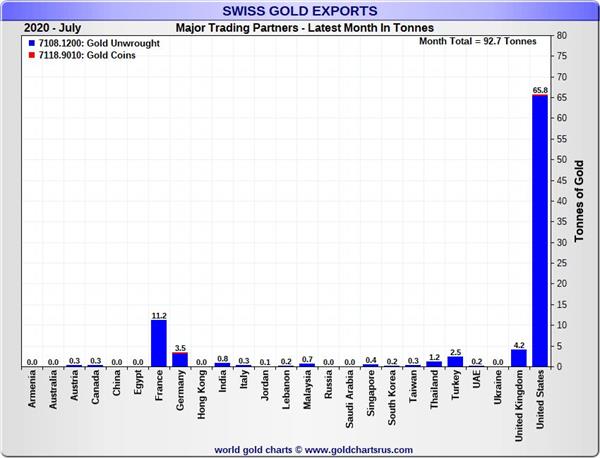 The latest Swiss gold import figures are almost equally revealing.  As well as gold (mostly in doré bullion form) coming in from gold mining nations which have their final product processed in the Swiss gold refineries, substantial imports came in from normally gold consuming destinations - Hong Kong and the United Arab Emirates being the most prominent.  These flows will either represent the running down of built-up inventories, gold scrap accumulations and/or profit taking as a result of the big increase in the gold price, which was running high in July compared with earlier in the year, before peaking early in the current month. 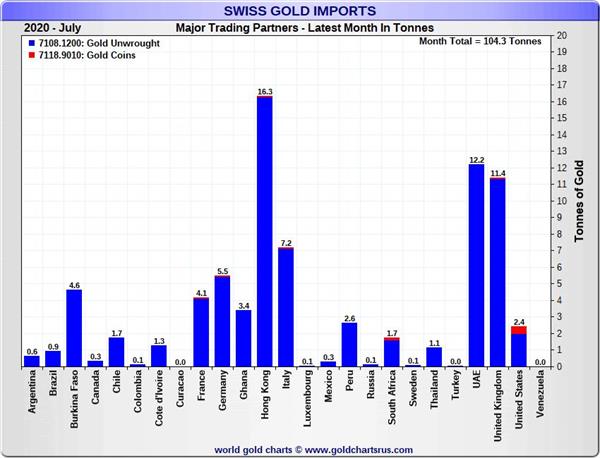 The Swiss gold import and export figures for the current year tend to emphasize the complete reversal in the global gold flow direction during the current year.  Chinese and Indian consumption levels have largely been replaced by flows into the major Western gold ETFs and a pick-up in sales of bullion in North America and parts of Europe in particular.  The tiny sales volumes into China and Hong Kong are also borne out by the continuing low levels of gold withdrawals from China’s Shanghai Gold Exchange (See: Chinese 2020 gold demand marking time – big annual fall forecast).

It will probably take a major recovery in the Chinese economy and an end to the devastation caused by the COVID-19 pandemic in India to bring gold flows back to anywhere near normal, if indeed that ever happens.  Meanwhile the uncertainty caused by the virus in the major Western economies will likely keep Western demand strong – but watch the flows into and out of the major gold ETFs and gold flows in and out of Switzerland for an advance indicator of if, and when, we might see further geographical supply/demand changes.