With the latest stats now available from the Swiss Customs Administration, the hugely anomalous pattern of gold flows in and out of the nation we have noted before are continuing.  Normal gold exporters have become importers, and vice versa – a pattern which we have put down to the combination of the big rise in the gold price this year (around US$250), coupled with a significant fall-off in Asian demand.

Switzerland, which hosts some of the world’s largest, and busiest, gold refineries, is major conduit for gold coming from producing nations and from those which vault much of the world’s gold for re-refining and export to the world’s major consumers, with its refineries specialising in refining and re-refining gold into the sizes most in demand in the gold consuming world.  So, the gold movements in and out of this small Alpine nation are hugely significant in terms of monitoring global gold flows.

The anomalous import and export data are perhaps illustrated best in the bar charts for the June Swiss gold in and out statistics from Nick Laird’s goldchartsrus.com service, which are reproduced below: 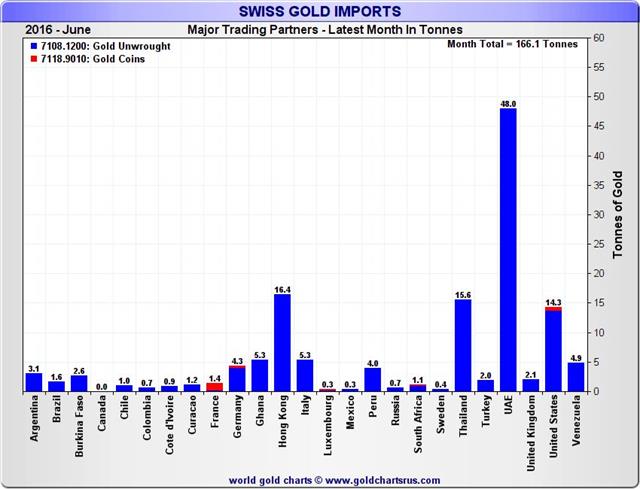 The Swiss Gold Imports chart above highlights the hugely anomalous sources for gold coming into the country in June being the United Arab Emirates (UAE), Hong Kong and Thailand.  The first two produce no gold domestically and the third only a tiny amount, but all three are major fabricators for gold jewellery and artefacts, and also represent important areas for gold investment.  With Asian gold demand so far this year substantially down on last year’s record flows – into Hong Kong and on into mainland China in particular – it very much looks from these figures that fabricators in these countries/territories have been both running down inventories, surplus to the lower demand levels, and, at the same time taking profits given the big gold price rises so far this year, by returning some of this gold back to the Swiss refineries.  This process will have been promoted by the Swiss refiners which, from anecdotal evidence, have been stretched to meet demand – bit as the exports chart below will show, the biggest part of this demand has also come form a non-traditional source – the UK!

So looking at the Swiss export statistics this anomalous gold flow back into the UK in particular, but also increasingly into the U.S. is hugely highlighted and is a pattern we have pointed out before, which is continuing.  Here, the UK has been by far the largest export destination for Swiss gold so far this year – a pattern continuing in June.  We have speculated that this is probably because of the massive demand for gold year-to-date from the big gold ETFs which vault their gold in London, and also suggests that perhaps the availability of non-attributed gold in these vaults was getting extremely tight.  Thus gold has needed to be imported to meet this demand, whereby the prior pattern of import and export figures had always been that gold flowed from the UK to Switzerland, rather than vice versa as we are seeing at the moment.

We may get some confirmation of this when we see the Swiss gold statistics for July, due out around August 20th.  Apart from a massive 28.8 tonne inflow into the SPDR Gold Shares ETF – the world’s largest which vaults most of its gold in London – over the July 4th U.S. holiday weekend, most movement in the ETF gold since then has been in terms of liquidations out, which would substantially reduce any strain that may, or may not, exist in terms of available non-attributable gold in the London vaults.

So the Swiss gold flows give an important snapshot of global gold supply/demand patterns, far in excess of the sizes of the flows themselves.  The movement of gold into Hong Kong, mainland China and India, is always a good guide of the state of demand in those key consumers, while the reverse flows we have been seeing is yet another important indicator.  With the gold price falling back over the past couple of weeks, and some indications that Asian demand may be beginning to pick up again, although only very mildly at the moment, we may start to see Swiss gold flows returning to a more normal pattern in the months ahead.