The Swiss gold import and export data for December confirms the trends we had already commented on earlier.  There still seems to be something of a sell-off occurring from traditional purchasing nations, although this is slowing down substantially, as they reduce inventories and take some profits.  Meanwhile the biggest recipient of Swiss gold exports was the world’s No. 2 consumer, India, which has to be an encouraging sign with regard to the resumption of normal gold flow patterns.

Exports to China, the world’s No.1 consumer, and its Hong Kong special administrative region, remained pretty much minimal though, but as being also the world’s No. 1 gold producer, and also receiving gold imports from some producing nations directly. China has little need for imports at this time to fully meet its demand.  We will get a better handle on that nation’s demand patterns when the Shanghai Gold Exchange (SGE) publishes its January gold withdrawal figure later this month.

But looking at some of the latest Swiss gold import and export figures in more detail we can get a better idea of total global gold flows at the end of last year.  The graphical breakdown of this tiny nation’s gold imports is shown in the chart below: 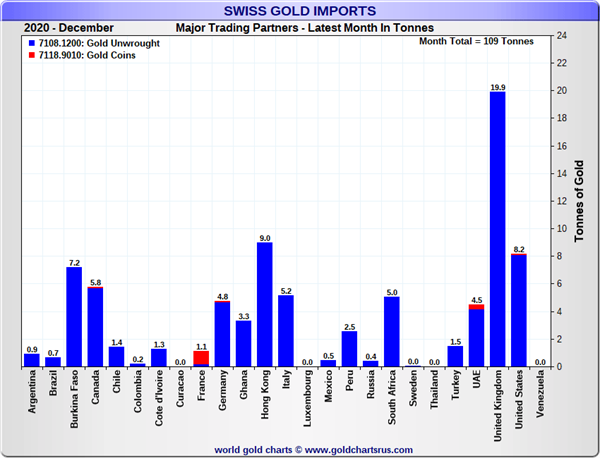 As can be seen, Switzerland only imported 109 tonnes of gold during December, most of which came from gold mining nations with the exception of the UK (a traditional gold trading conduit) with decent, but mostly falling, amounts from traditional consuming areas like Hong Kong, the UAE, Italy. Germany and France – the latter’s almost all being in gold coin form.  These slightly anomalous import sources will have been due to the running down of excess inventories before the year end and a degree of profit taking.  It will be extremely interesting to see if the pattern changes in January – we think it will!

Swiss gold exports in December were also a rather low 76.6 tonnes with India accounting for around 45% of these.  There will be few, if any, surprises among the other recipient nations. 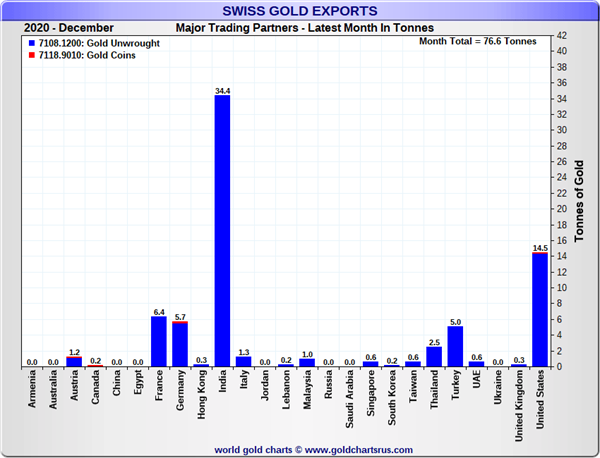 The overall significance of the Swiss figures cannot be overstated.  For historic reasons the Swiss gold refineries have always played a major part in global gold flows and in the past have processed an equivalent of up to around 75% of global newly mined gold.  Due to more gold being refined in other countries this amount has slipped and in 2020 the Swiss refineries imported a little over 1,600 tonnes of gold, equivalent to around 47% of global new mined gold according to figures just released by the World Gold Council in its latest Gold Demand Trends report.

The speciality of the Swiss gold refiners is to take gold as doré (partially refined) bullion direct from mines and in large good delivery gold bar form from the UK in particular, as well as scrap gold, and re-refine it to the even higher purity small bar and wafer sizes most in demand from global individual and fabricator consumers worldwide – and in the Far East in particular.  More recently some of the Swiss refiners have also been responsible for setting up and managing new refineries around the world – and also producing high purity gold coins for investors under contract for some other countries.

While this might seem to be positive news for the global gold price, both all the principal precious metals are continuing to drift lower after Monday’s price surges - indeed gold is heading towards the worrying $1,800 level and the Gold:Silver ratio back towards the 70 mark.  This demonstrates how shaky the sector is at the moment.  As always we would say don’t panic, we don’t think this is the start of a major bear market – fundamentals look positive for the moment.