Nearly 40% of Swiss gold exports in January were destined to go directly to mainland China and over 20% more was China-bound in terms of exports to Hong Kong (see bar chart below from Nick Laird’s www.goldchartsrus.com website.)  With India in 3rd place, the total percentage of Swiss gold exports to Asia and the Middle East was just over 88% - yet another confirmation that the greater part of world gold production is moving eastwards – and into hands which tend to be firmer than those of gold holders in the West. 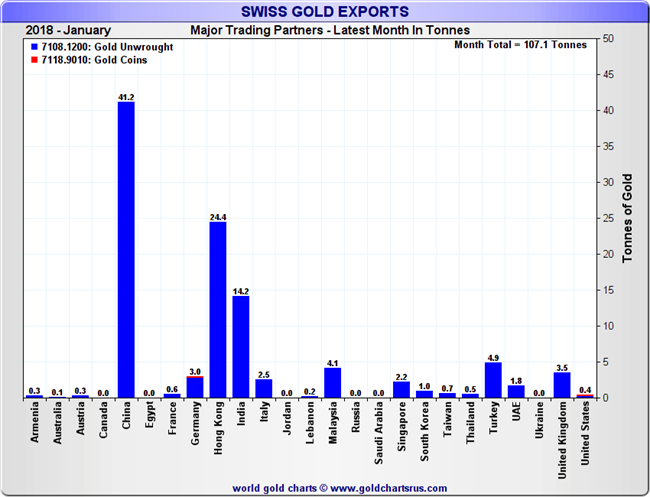 January was a low export month for Swiss gold – it was only equivalent to around 45% of global new mined supply, but Swiss gold exports in the first couple of months of the year tend to be low as a matter of course.  Total gold exports from the Alpine nation tend to vary most months between 75% and 35% of global new-mined supply with occasional outliers.  However the overall volume does appear to be diminishing with competition now arising from new Middle Eastern and Asian refineries beginning to eat into the traditional Swiss market for converting doré bullion and bigger gold bars into the smaller sizes in demand in the East.

This year the January figure to the Chinese mainland and Hong Kong will have been boosted by pent up demand ahead of the Chinese New Year which occurred this year on February 16th.  A year ago, for example, with the Chinese New Year falling in late January there was a massive Swiss gold export volume to mainland China in December 2016.  This year’s amounts, although significant, have been far lower, but Greater China remains the primary destination for Swiss gold exports.

China does not report its gold import figures so we tend to rely on the published Swiss, Hong Kong, UK, U.S. and Australian data, some of which takes some months to appear, to estimate total Chinese gold imports.  In the meantime we use Shanghai Gold Exchange withdrawal figures as a proxy and, as we have seen, these seem to be holding up well (See:  China: Jan SGE gold withdrawals up; Central Bank Gold reserves unchanged).  The China Gold Association has recently also come up with figures demonstrating that China remains the World’s top gold consumer, although we believe these figures drastically underestimate China’s true position as known gold export data to the mainland suggests a much higher figure (See:  China world’s largest gold consumer but figures understate).

But overall the latest Swiss gold export figures suggest that Chinese gold demand remains strong – perhaps not as high as the exceptional 2013 figures, but at least on a par so far with the years since then.