Switzerland, with its plethora of specialist refineries converting gold doré bullion, gold scrap and LBMA good delivery bars into the sizes and quality in demand in eastern markets, remains one of the best indicators of gold flows from Western to Eastern markets.  As such its officially-published monthly gold bullion import and export figures are watched keenly by gold market analysts with exports tending to go primarily (+80%) to Asian and Middle Eastern recipients.  In particular gold exports to Greater China (Mainland and Hong Kong) and India – the world’s biggest consumers – are always watched particularly closely.

The small European nation, which most years exports a quantity of gold which comes to around 60% plus of global new mined gold output, has just published its gold import and export figures for February, and that month fully 87.7% of its gold exports were destined for South and East Asia and the Middle East – see the barchart below from Nick Laird’s excellent www.goldchartsrus.com service : 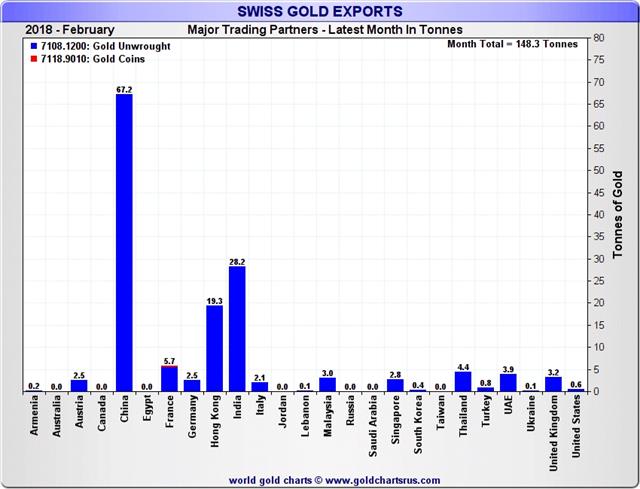 As can be seen the biggest February recipient of these gold exports was Mainland China, taking 67.2 tonnes.  With Hong Kong accounting for another 19.3 tonnes, Greater China alone accounted for around 58.3% of the Swiss gold exports.  India, the world’s other major gold consumer in its own right, acquired 28.2 tonnes of Swiss gold that month.  Most of the remainder went to Thailand, the United Arab Emirates, Malaysia and Singapore with 5.7 tonnes going to France, 3.2 tonnes re-exported to the UK, 2.5 tonnes to Austria and 2.1 tonnes to Italy making Europe the second largest area recipient, but hugely behind the eastern

February, of course, was the month in which fell the Chinese New Year this year which tends to boost demand there given the Chinese tradition of New Year gift giving, but it was the highest monthly level of Swiss exports to China since December 2016 when a massive 154 tonnes wended their way from Switzerland directly to the Chinese mainland. (See: China 154, Hong Kong 39. Swiss Dec gold exports show remarkable gold flows)

The latest figures though do continue to emphasise that Hong Kong is proving to be ever less of a prime conduit for Chinese gold imports with many exporters, like Switzerland, choosing to ship gold directly to the mainland and thus avoiding transit through Hong Kong altogether.  There is still an element of the world’s media which tends to report Hong Kong’s own monthly-reported gold export trends to mainland China as a proxy for the latter’s overall gold demand, but this is less and less the case and such intimations should be disregarded.