After a couple of anomalous months where the UK was by far the biggest recipient of Swiss gold exports, things seem to be getting back to near normal with India the biggest individual recipient, but lagging behind Mainland China and Hong Kong if the two are combined under the Greater China label given exports to Hong Kong are mostly ultimately destined for fabrication and re-export to the Chinese mainland.  The latest figures for March are shown in the below bar chart from Nick Laird’s goldchartsrus.com website – volumes into the Asian major consuming nations are still down on previous year but do seem to be picking up: 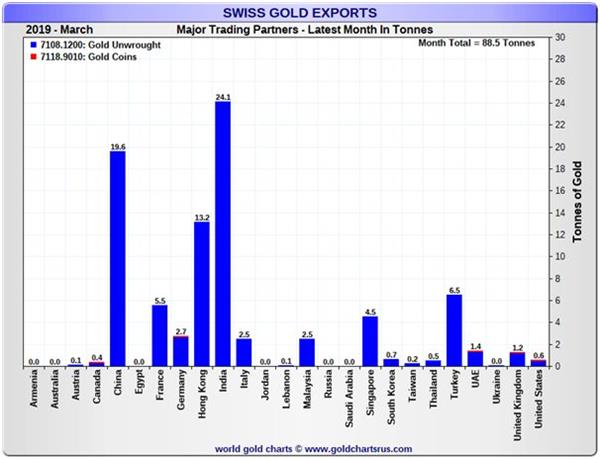 As can be seen from the second chart published below, recent Swiss import and export figures are considerably below those of prior years, but this does not necessarily mean overall global consumption is down by a similar amount.  In recent years a number of competitive refineries have sprung up  in Asia and the Middle East in particular, some of which are owned and operated by the Swiss refiners.  So the lower Swiss figures perhaps represent diversification of refining options rather than an overall fall in gold demand.  The latest Shanghai Gold Exchange gold withdrawal figures suggest that at least Chinese demand is holding up well (See:   China gold demand marginally up so far this year) and recent higher gold price premiums there suggest that there could be an even bigger uptick this month.  Indian gold demand also seems to be on the rise and the country’s central bank is among those seemingly adding gold to its reserves this year. 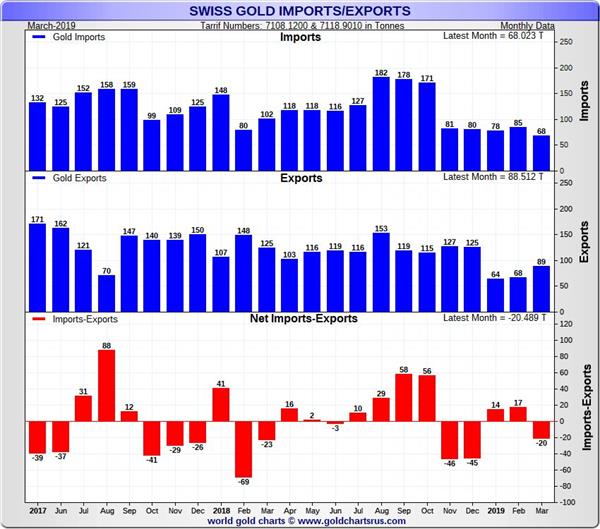 So while Switzerland remains one of the principal conduits for the ever-continuing movement of gold from west to east its importance in this respect may be diminishing.  Even so, in March more than 72 tonnes of gold destined for Asia and the Middle East was refined in Switzerland, being more than 80% of the nation’s gold exports and equivalent to more than a quarter of the world’s newly mined gold that month.  With direct exports from some gold producing or trading nations going to the regions directly gold demand in Asia and the Middle East seems to be holding up fairly well.

If we add central bank purchases into the mix global gold demand remains strong – perhaps only countered by the current offloads from the major gold ETFs which are adding to overall supply.  For example the biggest gold ETF, GLD, saw around 1.8 tonnes of gold withdrawn yesterday making a total of almost 25 tonnes so far this month.