The latest export figures for gold for the month of March from the Swiss Customs Administration show that India, once again, was easily the top recipient, taking 55.6 tonnes – more than gold flows from Switzerland to Hong Kong and China combined.  Hong Kong imported 24.3 tonnes and the Chinese Mainland 24.0 tonnes directly.  These latter figures confirm our now oft-stated observation that Hong Kong gold flows can no longer be considered a proxy for total Chinese imports with perhaps 40-50% now flowing directly into the Chinese Mainland by avoiding Hong Kong altogether.

See the excellent chart below from www.goldchartsrus.com which sets out the principal recipients of the Swiss gold exports on a country-by-country basis.  Note also that India, Hong Kong and China alone accounted for around 74% of Switzerland’s total gold exports, while Asia and the Middle East accounted for just under 88%, emphasising the continuing flows of gold from West to East. 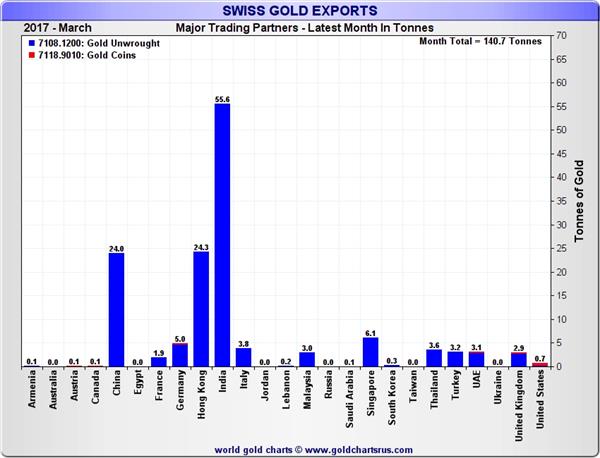 As for India itself, this is very much a continuation of the pattern seen earlier in the year suggesting that gold demand in the country, which used to be the world’s No. 1 consumer, is picking up significantly from the very low levels of a year ago when they were affected by a prolonged jewellers strike and the withdrawal of 100 and 50 rupee notes (India is very much a country which runs on cash).  March is the third month in a row where India has topped the list of recipients of Swiss gold exports and has taken in 119 tonnes of Swiss gold in the first quarter of the year.  (See: Over 80% of Switzerland January gold exports headed to Asia and Middle East and Swiss gold exports to India top the table in February).

While we may well see a reduction in Indian gold imports from Switzerland in April now that the Akshaya Tritya Festival (seen as a particularly auspicious time to buy gold) is behind us, wedding demand will probably mean that imports will remain at a positive level.

Indeed, in the rather restricted way that specialist precious metals consultancies like GFMS calculate gold consumption, India could well be rated by them as the world’s No.1 gold consumer again this year.  Metals Focus, the other big London precious metals consultancy, follows a somewhat similar line to GFMS, although has been a bit more positive on China’s consumption, and with it providing data to the World Gold Council it will be interesting to see what position the latter takes in its next Gold Demand Trends report.  The media tends to hang on the WGC figures as definitive and this could easily also suggest that India is back in first place among global gold consumers.  But we will still reckon on China being No.1 regardless as the major consultancies do not seem to rate gold consumption by the financial sector as being relevant, while we do in terms of overall gold flows.