Most months, refined and re-refined Swiss gold exports are an excellent indicator of the direction of global gold flows and, typically, have confirmed the overall directional pattern of gold moving from West to East.  That was until Russia invaded Ukraine, and the first full month of Swiss gold exports since then – March – has seen a complete reversal in direction indicating a huge re-classification of gold in the minds of the global investment community.

Switzerland, despite producing no gold itself, has historically been perhaps THE most important global centre for gold refining and distribution.  Its refineries take large good delivery refined gold bars, gold scrap and doré bullion (semi-refined gold) from mines and melts this down and refines, or re-refines, this principally to the sizes, forms and higher product purities most in demand by investors worldwide.  Although the numbers of competitive refineries which have sprung up around the world means that Switzerland is not quite so dominant a gold supplier of this highly refined product in global terms as it used to be a few years ago, its latest months’ gold exports are still the equivalent in volume to around half the world’s new mined gold so it remains an excellent guide to directional global flows.

In the past, we have noted that around 80% of Swiss gold exports has been destined for Asia and the Middle East, with China/Hong Kong and India being by far the dominant importing nations.  But not in March 2022!  As can be seen from the graphic below, China and Hong Kong combined imported only 7.4% of the Swiss gold exports that month and India 3.3%.  The big importers were the U.S. with 55.2% and the UK trailing behind at 12.7%. 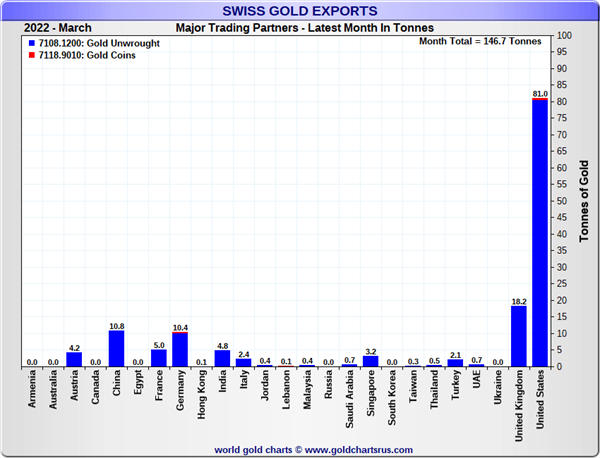 That the U.S. was the biggest importer of Swiss gold in March, with exports to Asia and the Middle East being, at best, pretty much minimal suggests a big switch in demand to safe haven investors in the West, presumably brought on by the big increases in inflation and general nervousness about where the Russia/Ukraine war is taking us globally.  The World Gold Council’s latest Gold Demand Trends report tends to have confirmed this, reporting a switch in Q1 into strong positive flows into the gold-backed ETF market.

Interestingly, if one looks at the sources of the March Swiss gold imports, while gold producing nations and the UK, as the centre of world gold trade, were all important sources as usual, Thailand – which is usually a significant importer of gold as it has a big jewellery fabrication sector- was the second largest exporter of gold to Switzerland in that month which, along with the slim Chinese and Indian imports, may represent profit taking on built-up inventory and a drop in demand in the face of the early March gold price surge to over $2,000 an ounce.  The price has since come down very sharply and this may re-stimulate demand levels in the east in future months – particularly in more price sensitive markets like India and, presumably, Thailand.

It will be particularly interesting to see if there is any recovery in gold flows from West to East when we review the April data from Switzerland.  We suspect exports to China may remain depressed as some key population centres are still being affected by the new surge in Covid infections there, but there is the chance that Indian gold imports may pick up again now that the gold price has come down sharply from its March highs.  The lower gold price prevailing towards the end of the past month may also impact adversely flows into the U.S., although continuing high inflation there will still be having a positive impact.